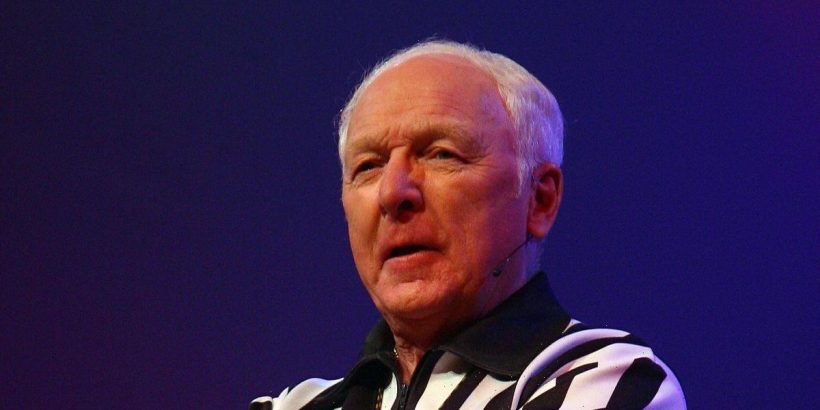 Saturday nights in the 90s are remembered by many families around the country as time to settle down and watch Gladiators.

Stars including Wolf, Jet and Lightning, and the sound of referee John Anderson's voice are a familiar presence on screen for many fans.

A regular presence on the series, he also appeared in the reboot of the show from 2008-2009.

The beloved Gladiators referee was born on November 28 1931 in Edinburgh, Scotland.

He had a love of sports from a young age, and growing up, he played on a Scottish Schools Football Team.

Before coaching award winning athletes, he was a competition winner himself in the Glasgow tennis doubles title with future Scotland manager Ally MacLeod.

Apart from his own career as an athlete when he was younger, Anderson also worked as a PE teacher in Glasgow, a Director of Physical Education at Heriot Watt University and Chief Leisure and Recreation Officer in Nuneaton.

After leaving behind his career as a teacher, he trained athletes during the 70s and 80s, including world record holder and runner David Moorcroft, 10,000m Commonwealth games champion Liz McColgan and 10,000m world record holder Dave Bedford, in addition to Olympic athletes between 1964-2000.

In total, he has trained over 170 athletes, with many of them being world record holders.

However, Anderson is best known as the referee on ITV series Gladiators from 1992-2000, fondly remembered for his legendary lines including "Contender ready, Gladiator ready" before challenges such as Hang Tough.

After one Hang Tough challenge, it is reported that he had to reprimand Gladiator and fan favourite Wolf, who turned on one of the hosts following his loss in the challenge.

The pair reunited on Lorraine in 2019, with John telling Wolf: "Good to see you’re still alive and kicking.

"You were the bane of my life at one point but you were one of my best of friends.

"You were the bad boy, and made it worth every minute."

Since the show ended, he has made appearances on programmes including Ant and Dec's Saturday Night Takeaway in 2005, and also returned to be the referee on the reboot of Gladiators on Sky One between 2008-2009.

In 2015, Anderson suffered a heart attack after feeling ill while out walking his dog.

In an interview with the Herald in 2016, Anderson said, "I was walking the dog last June and felt a slightly odd sensation in my right chest.

"After 10 days – still on the bike and in the gym, walking the dog and mowing the lawn – my wife, Dorothy, insisted I see the doctor. They said I'd had a heart attack. They stuck some stents and I am fine."

However, he has since recovered and returned to tv in a Gladiator parody sketch on tv show, The Last Leg, in 2017.

Jon has been happily married to wife Dorothy since 1962, and shot down rumours in 1998 that they had ended their marriage.

At the time, Jon told Daily Record: "We are very happily married," after rumours swirled that he had walked out on his wife when he went to Malaysia to coach the Scottish athletics team in the Commonwealth Games.