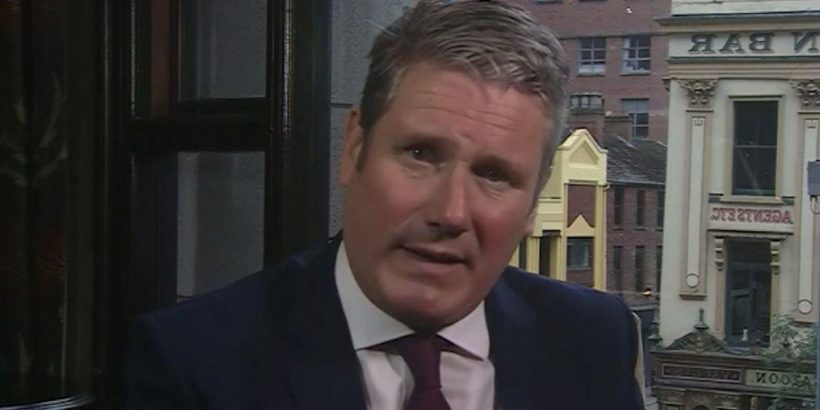 The Leader of the Labour Party, 58, appeared on the ITV breakfast show on Thursday morning to chat to Susanna Reid and Alastiar Campbell about the latest news in the world of politics.

It comes after a YouGov poll found that 69% of Labour members would prefer Andy Burnham in charge.

However, the interview was plagued by alleged technical difficulties and Mr Starmer claimed he couldn't hear Susanna and Alastiar's questions.

Speaking via a video link from Belfast, Sir Keir explained that the dodgy signal was interrupting the chat.

However, unconvinced viewers rushed to their keyboards to accuse the leader of the opposition of using the alleged technical blip as an excuse to avoid any questions.

Taking to Twitter, one fan penned: "Starmer pretending he can’t hear the questions."

A second person posted: "Pretending not to hear the question so he can ask and answer his own questions respect.

Another added: "Is Keir playing a game here?? I'm suspicious."

While a fourth viewer said: "He's choosing to hear what he wants."

Susanna also pointed out that she hoped that Mr Starmer wasn't blaming a tech issues on purpose.

The connection appeared to be crystal clear at the start of the interview when the politician congratulated England on wining the Euro 2020 semi-final match against Denmark. However, the technical issues apparently got worse as time went on and the interview descended into chaos.

Football fever was in the air throughout the show and Susanna was forced to explain about her croaky voice.

The former BBC Breakfast star went to Wembley Stadium on Tuesday to watch the clash between England and Denmark.

She was one of the 60,000 people who attended the clash and appeared to be feeling the effects of her night out this morning.

Susanna explained to viewers watching at home that she didn't get home until 1am and only had a few hours sleep before going on air at 6.30am.

The TV beauty posed for snaps with former co-host Piers Morgan's son Spencer inside the stadium surrounded by thousands of football fans.

England will take on Italy on Sunday night at 8pm.

Good Morning Britains airs weekdays on ITV at 6am