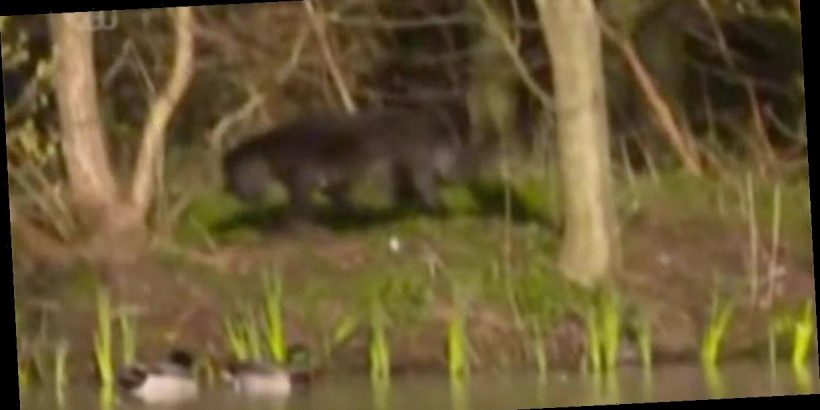 Good Morning Britain fans were left astounded after spotting a mysterious animal lurking behind Andi Peters on the show – but its identity has now been revealed.

Andi was sailing along a lake in Rickmansworth, Hertfordshire, yesterday (April 7) when he spotted a swan on the riverbank.

But it wasn’t the bird that attracted a hive of interest.

As the camera filmed the swan, a black four-legged animal appeared out of the woodland.

After an eagle-eyed fan shared the clip to Twitter, the post was flooded with a torrent of comments suggesting what it could be.

“Looks like a big cat to me,” one said. “A black leopard or jaguar. It's movement is so much like one of those.”

Another commented: “Definitely a cat by the way it sort of stalks away or slinks away, pretty sizeable as well, maybe a small puma type cat.”

And a third said: “The pic is a bit blurred & needs to be blown up but looks too big for a dog. Maybe an escaped puma?”

On today’s show, Andi addressed viewers’ queries about the mystery animal and it turned out there was rather a simple explanation.

“Even the local council got involved to find out what it was,” he said. “It was just a dog.”

But GMB host Ben Shepherd then intervened, saying: “You said it was a wolf yesterday.”

Andi joked he simply said it to make the story go viral before revealing who the pet belonged to.

“Sarah Collins said it is actually her dog – Cocoa,” he added.

Claims of big cats stalking the British countryside are nothing new.

Earlier this week, a mysterious black creature was spotted prowling through a field in Cheshire.

And in northeast Wales, a resident claimed to have seen a black “puma” making its way through another field.