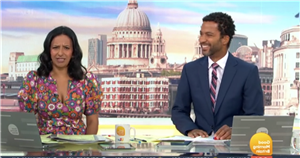 Good Morning Britain host Ranvir Singh made an offhand comment that the Queen “doesn’t do very much” other than “shake hands” in her job as the ruler of Britain and the longest-running monarch.

It came about after the 43 year old revealed she has a high-ranking role within the University of Central Lancashire.

“You snuck in there that you’re a chancellor with a university, that’s pretty impressive,” the presenter prompted her.

“It’s like being the Queen, you don’t do very much, but you go around shaking hands.

Seemingly realising she needed to row back from her comment, the host then added: “Sorry to the Queen – you work very hard.”

“Am shocked and disgusted that you just said the Queen doesn’t do much but shake hands-you should be ashamed of yourself!

Another criticised: “As if you’ve just said the Queen doesn’t do a lot other than shake peoples hands.”

While a third called the GMB host for assuming men and women in their 90s should be able to do more.

Find out more about the latest gossip from GMB with the OK! newsletter in your inbox every day

In a response to another fuming fan, the political presenter decided to clarify her mistaken snub of the longest-running British monarch.

“Agree you’re right,” the presenter wrote in response. “I actually meant it’s a ceremonial told without any real power but fumbled it. #livetv.”

Good Morning Britain continues weekdays at 6am on ITV.