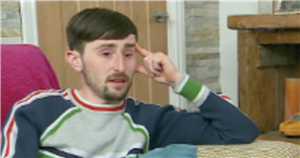 Gogglebox fans were in hysterics after Sophie Sandiford gave her brother Pete a new hair makeover.

Using a new tool, the Blackpool lass began to groom her brother's tresses in an upward motion – adding excessive volume.

After Channel 4 favourite Sophie had finished styling the new dad's locks, she took off to fetch a mirror to showcase the results.

Pete asked: "Why does it smell of burning?"

"Because it's probably new," replied Sophie.

"It's not burning hair is it?" responded Pete.

Laughing, she said: "Lets have a look. Volume on that's insane. Let me show you with the mirror, you'll be made up with this. You've never looked so good."

Not pleased with the outcome, Peter chirped back: "I look like f***ing Rod Stewart."

He added: "You do know i've got to go and put petrol in me car in a minute ."

After the playful scenario on Friday night, Twitter erupted with a number of hilarious comments.

Another shared a comparable image of the hitmaker and the TV star asking fans "Who wore it better? Pete or Rod?"

While others joked: "Pete and Sophie are the best, I only watch it for them two, #gogglebox."

Pete recently became a dad after his wife Paige Yeomans gave birth to their son.

The couple announced that they were expecting their first child together in April 2021.

In October 2020, Pete shocked fans when he took to Instagram sharing a picture of his mysterious girlfriend Paige – who up until this point had never been seen before nor mentioned

Captioning the loved-up snap, he wrote: "My Mrs and best mate what more could I ask for."

He made it clear that the picture was a throwback from 2019, leaving his followers dumbfounded that he'd kept Paige a secret for so long.

Much to the delight of Gogglebox viewers, Pete shared the happy news on the Channel 4 programme that his girlfriend had accepted his hand in marriage.

In September 2021 Pete revealed in an interview with OK! Magazine that the pair had tied the knot in secret.

He said: "I'm married now! It was nerve-wracking but the best day of my life. Well, second best day as I'm a dad now, too."