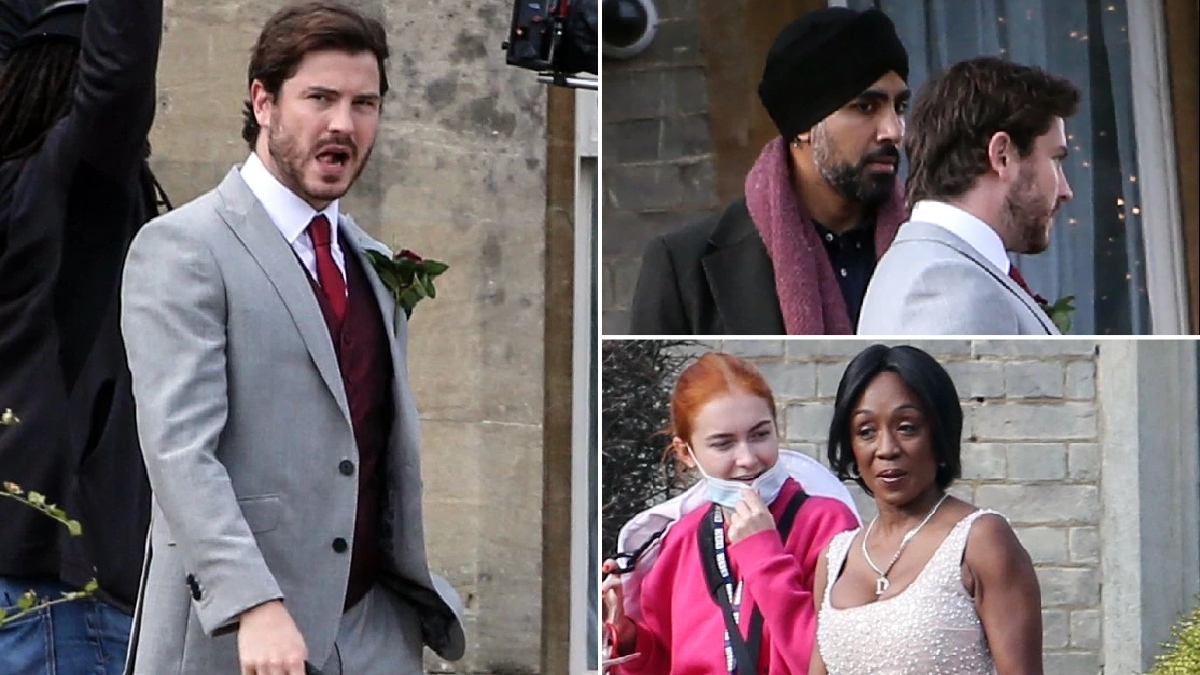 Sinister serial killer Gray Atkins (Toby Alexander-Smith) may be set to murder again after he is jilted at the altar in a surprise EastEnders wedding.

The cast and crew of the show have been filming scenes on location which reveal a wedding for Jack Branning (Scott Maslen) and Denise Fox (Diane Parish).

But in an unexpected turn of events that screams shotgun wedding, Gray is also a groom for a second ceremony on the same day.

However Gray’s hopes of marriage look doomed as he has been pictured looking thunderous after his bride abandons him at the altar.

EastEnders is not confirming who the unlucky bride is but Chelsea (Zaraah Abrahams) would seem the most likely, given that she is pregnant with Gray’s baby and that it would make more sense for her to share a wedding day with mum Denise.

However, Gray and Whitney Dean (Shona McGarty) have been sharing a growing affection, with Whitney’s penchant for falling for the most dangerous men biting her once more.

Gray’s temper in front of everyone, including the family of his first wife Chantelle, who he murdered in cold blood, may expose his true colours.

We see him in scenes being confronted by Kheerat Panesar (Jaz Deol), who has suspected all along that gray had a hand in Chantelle’s death.

Gray is then seen looking murderous as he is driven away – is he heading to take revenge on the woman who stood him up?

Or will he be stopped before he can claim another victim?

Show bosses have promised a comeuppance for Gray but have suggested that there is much more to come; and were tight lipped over whether he will kill again before being exposed.

‘Gray’s story was always intended to be a longer arc after the death of Chantelle,’ EastEnders’ senior exec producer Kate Oates told Metro.co.uk. ‘But even though some of his actions have been extreme, they have always been grounded in the roots of Gray’s character.

‘He’s a classic narcissist: everything he does is designed to fit a narrative that absolves him from guilt, and paints him out to be a good guy.

‘I think in Gray, we have a character who tells himself that Chantelle died in a terrible accident; that Tina had to die so he could be there for his kids; and Kush had to go, because he and Whitney are ‘meant to be’. He’s the centre of his own universe, and nothing is his fault.’

‘We’re building to the kind of culmination of the Gray storyline,’ said boss Jon Sen, teasing what’s ahead. ‘And that takes it’s next chapter.

‘It has been a very long story arc and it’s taken many twists and turns, but we are kind of going back to the grass roots of the story – really pivoting it back to its origins. It’s going to be a fascinating turn of events for the Atkins family.’

Kate added: ‘Life is going to throw Gray a curveball; something out of his control, that will bring the story back to its grass roots as he tries to start again in new relationship.

‘But Gray hasn’t been as clever as he thinks. Smoking guns are all over the Square, just waiting to be found. Gray’s downfall awaits.’

These scenes are expected to air over the New Year period.