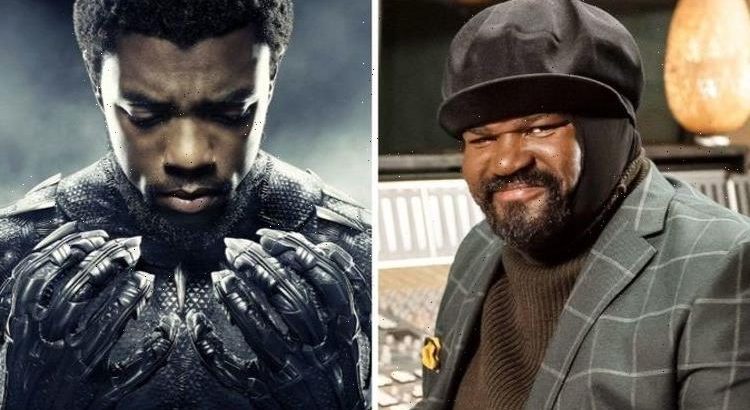 Boseman died in August last year following a private battle with colon cancer since his diagnosis in 2016. Tributes have poured in for the Marvel star, including a reference to his iconic role as Black Panther in Disney’s brand new Christmas advert, which features vocals from his friend, jazz singer Gregory Porter.

During his tour of the UK, the acclaimed vocalist spoke exclusively to Express.co.uk about lending his voice to Disney’s Christmas charity single, Love Runs Deeper.

The track features a collaboration between Porter and singer CHERISE, with music from LA-based songwriters PARKWILD.

Disney fans will be able to spot several references throughout the new festive advert, including Black Panther’s Wakanda Forever salute.

READ MORE: John Bishop on his split from wife: ‘Couldn’t stop the tears’

Boseman had been an integral part of Disney’s Marvel Cinematic Universe ever since King T’Challa was introduced in the 2015 blockbuster, Captain America: Civil War.

He was also nominated for a posthumous Academy Award for his performance in Ma Rainey’s Black Bottom on Netflix.

Before taking on his superhero role, Boseman was well-known for bringing black icons to life on screen, such as Jackie Robinson in 42 and James Brown in Get On Up.

Since his death, Marvel Studios and Disney have paid a number of tributes to his lasting legacy, most recently in the new Christmas short film, The Stepdad.

A sequel to last year’s Make-A-Wish campaign, this year’s advert tells the story of Mike, who learns to connect with his step-children through a magical storybook.

In addition to plenty of nods to classic Disney films, Boseman’s Marvel journey is given a touching homage when Mike’s nephew and stepson give each other a Wakandan salute over a video call.

However, Porter remembers Boseman well before he found worldwide success as a superhero and major film star.

“But he’s part of my life story,” the singer continued.

“We would sit in the coffee shop and talk about having success someday.

“So it was just amazing that we cross paths in such an interesting way, now.”

Fans can find Boseman’s final performance in Marvel’s animated anthology What If…?, for which he reprised his role as T’Challa for four episodes.

Plus, Porter is continuing his slate of UK TV appearances as he’ll be performing his song Revival on this Friday’s edition of The Graham Norton Show.

‘The Stepdad’ is Disney’s magical ‘From Our Family To Yours’ animated festive advert, featuring an original soundtrack performed by Gregory Porter, which can be watched on DisneyUK’s YouTube channel: https://youtu.be/nS_yqoQmgBU. A Minnie Mouse soft toy and Disney journal that are inspired by the skating Minnie and storybook in the ad are available exclusively from shopDisney.co.uk. The campaign supports Make-A-Wish® International. To learn more, visit thewaltdisneycompany.eu/fromourfamilytoyours.