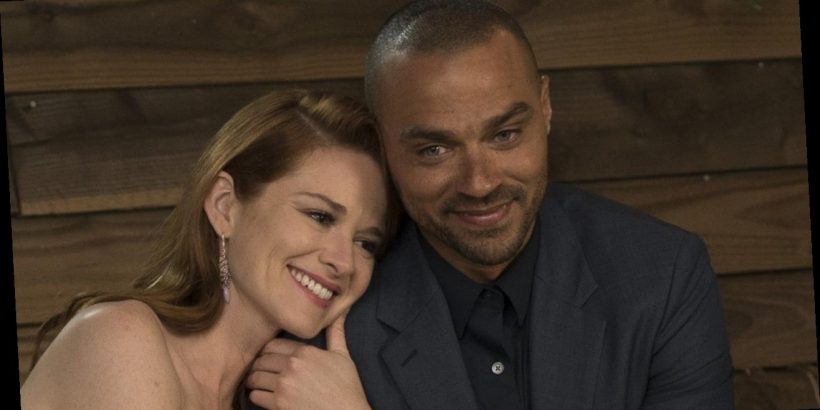 Jackson and April, together again!

Grey’s Anatomystars Jesse Williams and Sarah Drew reunited for the first time on set three years after Drew left the ABC medical drama at the end of season 14. The former co-stars posted video and photos to their respective Instagram pages Tuesday morning to commemorate the special occasion.

Drew is set to return to Grey’s for an upcoming episode in season 17.

“Nbd. Not excited at all,” the 40-year-old actress, who played fan-favorite Dr. April Kepner, captioned her selfie with Williams, both masked up but the glee evident in both their eyes.

Williams, who has been vocal about wanting Drew back in the Grey’s orbit since her departure in 2018, also shared a video of him walking into the van before the camera panned to reveal Drew right behind him.

He simply captioned his Instagram video with a present emoji. Drew commented on the post with heart and smiling emojis, followed by a wink. Grey’s stars Ellen Pompeo, Kelly McCreary and Giacomo Gianniotti, whose character was killed off in last week’s midseason premiere, also got in on the comment action.

Camilla Luddington confirmed Monday that she saw Drew on set last week, responding to a fan asking if she had crossed paths with her yet.

“I did happen to run into a gorgeous red head I have missed SO. DAMN. MUCH!!” she excitedly tweeted.

Drew left Grey’s following the season 14 finale after nine seasons. Her departure at the time came unexpectedly. She was first introduced midway through season 6 when Grey Sloan Memorial Hospital merged with Mercy West. Her character has a young daughter, Harriet, with Williams’ Jackson Avery.

Since her exit, Drew has addressed the possibility of whether she’d ever return to Grey’s, saying she’d “never say no” if the opportunity arose.

“That’s a hard question to answer because nobody has asked me to come back, so I can’t answer that,” the Cruel Summer star told ET in November. “All I will say is that I love my family over there, so I would never say no to the possibility, but it has not presented itself.”

In her final episode, April married Matthew Taylor (Justin Bruening), though Drew’s Grey’s return may now offer a glimmer of hope for fans wishing for a reconciliation or closure between April and Jackson.

Williams recently hinted at a possible reunion between Jackson and April, sharing he would “love any opportunity for us to continue that story” because they “have an ability to communicate and be vulnerable with each other and push each other.”

“They are incredible together,” Williams told ET in February. “I am a fan [of Drew’s] and she is absolutely one of the most special people I’ve worked with. We developed those storylines together with our incredible writers, so it’ll always hold a very real place in my heart and memories. We stay in contact. She is the sweetest.”

Grey’s Anatomy airs Thursdays at 9 p.m. ET/PT on ABC. For more, watch below.