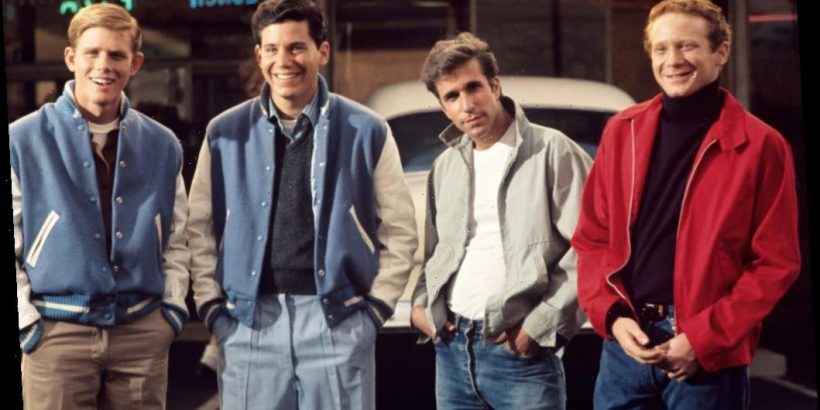 Happy Days is one of the most memorable TV shows of the ’70s, and few could forget about Henry Winkler’s portrayal of Arthur Herbert Fonzarelli, better known as Fonzie. Winkler’s talked at-length regarding what it was like getting the role and acting the part. And it seems he has fantastic memories of working on the Happy Days set.

When Winkler visited Jimmy Kimmel Live!, he talked to Jimmy Kimmel about playing Fonzie. And it turns out Winkler told a major lie during a photo shoot as the character.

Winkler almost didn’t get the role of Fonzie on Happy Days, but it’s hard to imagine anyone else in the iconic role. Micky Dolenz from The Monkees nearly snatched the role, but the musician was reportedly too tall. Show creators thought Winkler was the better choice because he only stood at 5’6.”

“They put me in a T-shirt, jeans, and a MacGregor golf jacket,” Fonzie told the BUILD Series regarding when he first got the role. “Very hard to be cool in a golf jacket. I went back in, and this time I convinced [show creator] Garry [Marshall] I would be OK. And I had six lines to begin with, and the rest is history.”

It wasn’t always easy for Fonzie to step into his role, though. He had dyslexia that hurt his self-confidence over the years. ““I bought into the fact that I was stupid,” Winkler explained to the BUILD Series. “My parents called me stupid. My teacher … she called me stupid. You take it along with you.”

Despite the past hurt, Winkler was still able to perfectly step into the role we all know and love today.

Winkler visited Jimmy Kimmel Live! to talk about his role as Fonzie. And an old magazine cover of Winkler came to light.

“This is a magazine that’s almost entirely devoted to you,” Kimmel noted. “I mean, if you go through this magazine — I spent a good house looking at this magazine today. It’s at home with Fonzie.” Kimmel then shows the magazine spread of Winkler that shows how the actor cooks, cleans, and takes out the trash just like everyone else.

Kimmel then opened the magazine up to a section that talks about “Fonzie’s secret passion.” According to the magazine, Kimmel’s ultra-passionate about pottery.

“It says you’re passionate about ceramics here,” Kimmel points out. But Winkler then owns up to the truth.

“Yes, OK, so this was a like,” Winkler explained. “This is my very first photo shoot with ABC. And they said, you’ve got to do something. You’ve got to be active. And, so they put me in front of a wheel. I have never touched clay in my life. But didn’t that look good? I looked good.”

Winkler also lied about his favorite recipes in the magazine

Winkler’s love of clay wasn’t the only lie told in the magazine. Kimmel also brought up a segment that shared the actor’s favorite recipes — and Winkler noted he wasn’t much of a cook at all.

“Now, this is when you know you’ve made it,” Kimmel noted while showing off the recipe section. “Henry Winkler’s favorite recipes! Pot roast, potato pancakes, and chocolate mousse.”

“I actually have never made this meal,” Winkler told Kimmel. “But, they are my favorite! Stacey, my wife, makes an unbelievable pot roast. I love potato pancakes with applesauce and sour cream. And chocolate mousse was, at one time, my favorite dessert.”

“I feel like my whole childhood was a lie now,” Kimmel joked.

“I ate that, I just didn’t make that,” Winkler joked back.