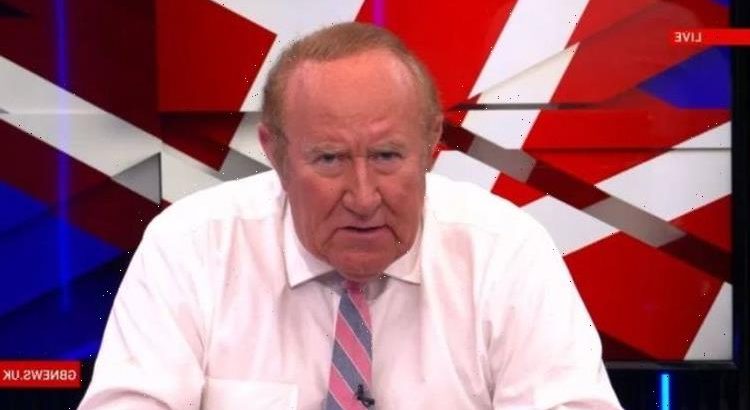 GB News has gone through a tumultuous start over these past few months, with the network’s flagship presenter Andrew Neil taking an extended break from the show just two weeks in. Colin Brazier has been filling in for the journalist in his absence during his primetime 8pm slot. But has Andrew Neil left GB News for good?

Following a hotly-anticipated start for GB News, the network soon found itself struggling to find a foothold among the established rolling news coverage.

Its lowest point came last month, when the channel attracted zero viewers for some of its broadcasts during the second week of July.

This came on top of many boycotting the channel for its outspoken opinions on topics ranging from Brexit to COVID-19 restrictions – and presenter Guto Harri taking the knee on air.

The first real sign of trouble came when Neil decided to step down from hosting the evening show on June 25.

Speaking for the last time on his usual 8pm slot, Neil did admit to the network having a “rocky start” but did emphasise that they will continue to “get better every day”.

Neil added: “In two short weeks, we’ve already built a loyal audience which has beaten all of our expectations, it’s often bigger than the other news channels and it’s growing.”

Despite this, Neil still made the decision to have an extended break, giving no indication on when he might return.

Colin Brazier assumed presenting duties in his absence on a temporary basis, but now that looks to be a more permanent arrangement.

Brazier traditionally hosted the morning show for the programme alongside Mercy Muroki, but things looks to be changing at GB News as the presenter is now taking over the evening show full-time.

The morning show is going through a serious makeover as well, with GB News announcing Patrick Christys will be joining the new morning news segment.

Christys is a political commentator and regularly appears on Sky News, the BBC, and TalkRADIO.

He will be joining Muroki, who is launching the new morning show, To The Point.

Christys, who has made TalkRadio’s Drivetime one of the most popular shows until his departure on Tuesday, told listeners about his move.

The presenter said: “GB News is already changing the conversation and setting the news agenda rather than following it, which is exactly what I love doing most.

“Mercy and I will not be afraid to tackle the punchy issues that Britons really care about but that are, too often, ignored by others.”

With Brazier taking on the evening show full-time and Neil making no statement on his return to the channel, many viewers are taking this as a sign the presenter has left permanently.

The future of Neil’s involvement with GB News remains to be seen, with Neil’s departure approaching two months now.

However, no official word has come from the channel or Neil himself confirming a permanent exit.

Neil has been away in his chateau in France, with the journalist still there after nearly two months.

“Maybe he has the GB News variant, long periods of self-isolation away from its studio recommended,” another commented.