The Carters were left shocked and confused in tonight’s EastEnders (November 9) as Linda seemingly turned her back on husband Mick forever.

With Mick wrongly being sent to prison for shooting Stuart (when Stuart shot himself and framed Mick), Linda has blocked all forms of communication with her husband. What’s more, Linda has now decided to befriend Stuart, much to the family’s disgust.

The closing moments of tonight’s episode saw Linda kick Tina out of the Queen Vic, causing her family to question her actions even further. But now, viewers suspect this might all be an act to trick Stuart into confessing the truth about the shooting.

One fan tweeted: “I can’t wait to see what Linda has up her sleeve – I’m telling you all this is all just for show for Stuart. She needs him convinced that she’s on his side, then the claws will come out.”

While another wrote: “Surely Linda is just doing all this to get Stuart to slip up so she can prove Mick’s innocence?”

EastEnders continues next Monday night (November 12) at 8pm on BBC One. 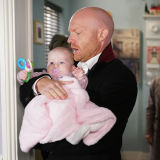