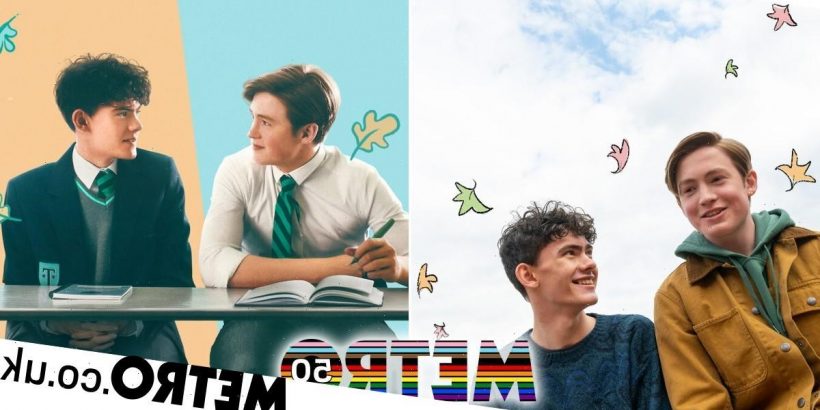 Heartstopper has become the most adored Netflix series following its debut in April.

Based on the graphic novels by Alice Oseman, the joyous Netflix has been celebrated by millions of fans totally enamoured by the blossoming love story between school boys Nick Nelson (Kit Connor) and Charlie Spring (Joe Locke).

Heartstopper has been widely praised by viewers for its authentic LGBTQ+ storytelling, with countless fans feeling inspired to come out to their own families as a result.

Older queer viewers have also praised Heartstopper for offering positive representation for LGBTQ+ youth, which they didn’t have growing up.

As everyone will be out and about celebrating 50 years of Pride this weekend, award-winning director Oliver Warren – who was recently named one of the International Screenwriter’s Associations top 25 Screenwriters to Watch – explained why he believes Charlie’s character stands out from the rest.

‘Charlie, he’s not ashamed of being gay.,’ he told Metro.co.uk.

‘And he still carries elements of shame around with them, which most people in the LGBTQ plus community do, because it’s something that is ingrained when you’re younger, and even still for kids.

‘Charlie still has that in him, but it’s not his motivating force. And I think what’s interesting is you see how elements of society awaken that in him,’ he added.

Older queer viewers have also praised Heartstopper for offering positive representation for LGBTQ+ youth, which they didn’t have growing up.

‘I grew up in the 90s, and before Queer as Folk, there really wasn’t anything on TV,’ Warren added.

‘The beautiful thing about the story and about seeing yourself on screen and representation as it kind of gives. It gives a language to your inner monologue, and I didn’t have the language to understand my sexuality. And that’s something that only I only really came to terms with when I went to university and I started meeting gay people.’

Over the past 20 years, we’ve been introduced to memorable characters that have paved the way for LGBTQ+ representation from The Office’s Oscar Martinez (Oscar Nunez) Sex Education’s Eric Effiong, (Ncuti Gatwa) and It’s A Sin’s Roscoe Babatunde (Omari Douglas).

‘It’s very encouraging that Jules’ character is one of the more together ones,’ he told Metro.co.uk.

‘She comes across as a wise soul in a young body, and she seems more together than the rest of the cast, who are all fairly flawed.

‘She isn’t totally clear of all of that, she comes across as the wiser ones that people come to for help and advice, even Nate (Jacob Elordi) has this massive crush on her which he can’t talk about, because being in love with a trans girl means that you’re, in his mind, gay.

‘But she’s down to earth about everything, and is aware about her place in society and doesn’t let it restrict her.’

He continued: ‘It isn’t mentioned at any point that she is transgender, and obviously you know it, but it’s never a conversation, it’s never an issue.

‘She is a very nuanced character, a very supportive character. She picks Rue (Zendaya) up whenever she’s having a bad time, or fallen back into addiction.

‘Obviously she has dalliances with Nate’s dad (Cal Jacobs) which isn’t great, but largely she is a positive, strong female character. The young trans girls watching Euphoria must feel incredibly encouraged that there’s this high school girl moving through life unquestioned and unfettered by the bonds of gender.

‘I love Euphoria, I think it’s great and it’s super queer. And that’s what we need to see, and the same with Heartstopper. It makes you feel like you’re not alone, and it’s incredibly positive that we’re seeing that.’

Heartstopper is available to stream on Netflix.