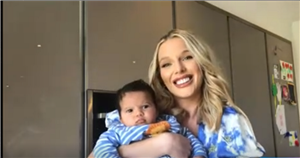 Helen Flanagan has revealed that she had her return to Coronation Street all lined up, but her plans changed when she discovered that she was pregnant with her third child.

The former Corrie star played Rosie Webster on the cobbles and left in 2012, before making a brief return from 2017 to 2018.

But a third stint on the ITV soap was ended by the happy news that she and footballer fiance Scott Sinclair were expecting son Charlie, who was born six weeks ago.

In an interview with Loose Women on Tuesday, where she introduced baby Charlie, Helen said: “It was really funny because as soon as my fiance moved back to play for Preston, I was in talks with Corrie about going back and then I found out I was pregnant a few days later and I had to say in my meeting that I was pregnant.

“So I was going to go back and then I fell pregnant with Charlie, and he’s the best thing ever, so.”

Asked whether she would go back to the role in future, Helen said: “I would love to, I grew up on the show and I do miss the excitement of that, but your children are only young for such a short time so I’m just really enjoying them being young and being at home.”

Helen, 30, is also mum to Matilda, five, and Delilah, two, but said it would be a long time before she considered having more children after suffering from hyperemesis gravidarum in pregnancy, an extreme form of morning sickness.

She said: “It was horrendous, hyperemesis is not morning sickness. “It makes you feel quite low mentally as well, because you just feel so unwell. I didn’t have the lights on, I didn’t watch TV, I couldn’t do anything because it made me feel sick.”

Helen added: “I love having babies, I really, really do, but when I actually think of the hyperemesis, I couldn’t have another for a very long time because I wouldn’t be able to look after Charlie, Matilda and Delilah.”

She and Scott have been together since 2009 but are still no closer to their wedding going ahead because of cancellations caused by coronavirus.

Sharing that they would like to get married abroad, Helen said their big day “might be 2023” by the time the backlog of postponed weddings had cleared.