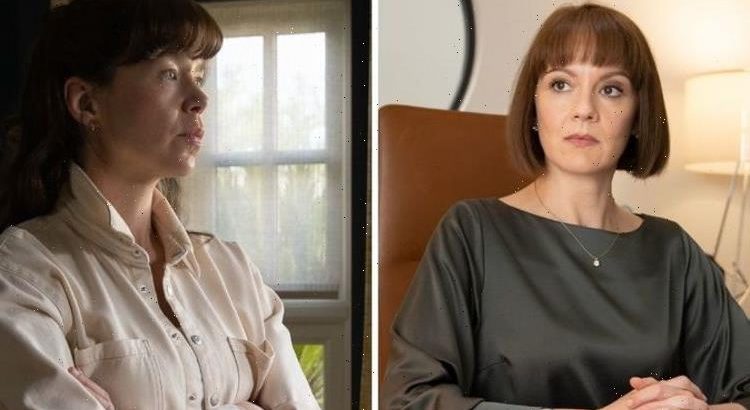 Hollington Drive follows two sisters, Helen (played by Rachael Stirling) and Theresa (Anna Maxwell Martin). Theresa fears the worst as she starts to think her son is somehow involved in the disappearance of one of his schoolmates. The ITV show is filled with tension and mistrust, but behind the scenes of the atmosphere was just as frantic.

Hollington Drive was an immediate success for ITV when it premiered at the end of September.

The four-part drama gripped viewers for its morally grey storytelling and powerhouse performances by Stirling and Martin.

While viewers did acknowledge the show’s premise was bleak, the commitment from the stars showed and the results were immediately evident.

However, what some fans may not be aware of was the atmosphere behind the camera, as the filming process was far from a smooth journey.

As with countless other shows, the series had to deal with COVID-19 restrictions while filming.

This caused some delays in production and added an extra layer of difficulty for the production team and cast alike.

Yet, the crew managed to balance out the stress of the shoot by enjoying themselves between takes.

Stirling explained: “Some of it was very challenging and tough. When you’re filming those scenes, it’s not all entirely fake, you do have to visit some of those real emotions.

“After a project like that, I always need to head towards a comedy, because it’s a very intense story to tell.

“You want it to be a really satisfying experience for the audience, so we’ve got to keep it tight and believable, and play the darkness.

“In the end it meant we needed more levity between takes because we were all like coiled springs, especially having been in lockdown isolation.

“There was a certain level of hysteria on set after – and sometimes during – these incredibly difficult scenes because it all comes from the same place, deep grief and absolute hysteria are two sides of the same coin.”

The star went on to say how lucky she felt to be able to film during the pandemic and be able to work amongst a group of actors.

The Covid protocols were unknown when filming began, but the production soon adapted to the changes to ensure the safety of everyone involved.

As Stirling added, the actors had an easier time as they were able to take their masks off during the filming.

Despite the seriousness of the topic and script, director Giammatta explained the importance of adding humour to the story while acknowledging the need for balance.

“When you’ve got humour in a script like this, you’ve got to be really careful that it’s not too funny, but not too dark,” Giammatta told Radio Times.

She added: “But it’s got to be realistic and when we put characters in an extreme situation, human beings do things that aren’t quite what we expect them to do. So that was really important for me.”

Hollington Drive was credited as a self-contained miniseries, with ITV not confirming any form on continuation to the story.

Hollington Drive airs Wednesdays at 9pm on ITV and is available to watch on ITV Hub.