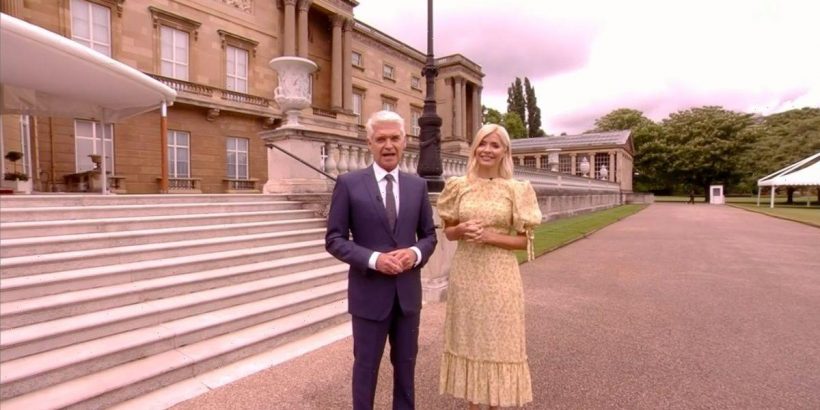 Holly Willoughby and co-presenter Phillip Schofield hosted This Morning live from Buckingham Palace on Tuesday – and narrowly avoided making a mess of the Queen's abode in the process.

The special edition of the ITV show celebrated the Queen's historic Platinum Jubilee and saw Holly, 41, and Phillip, 60, explore the royal residence.

Both presenters were dressed up for the occasion with Holly wearing a yellow floral dress with her signature blonde locks styled in loose waves, while Phillip looked dapper in a navy blue suit and matching tie.

Throughout the show the pair were seen walking through the state rooms, gardens and kitchens, with many special guests joining them along their tour.

They were instructed to be particularly cautious as they broadcast from the Queen’s iconic London property, which happens to be filled with historic items from prior monarchs. But it was Holly who nearly landed herself in hot water with Philip after she was presented with some delicious treats by chef Phil Vickery.

Phil handed Holly a late full of scones topped with jam made with fruit from the grounds of the Queen’s various homes.

And being polite, the chef asked Holly if she'd like to sample one, to which she replied: "Delicious, yes. I’ll take one and nibble it in the break."

A clearly panicked Philip instantly screamed: "Just don’t drop it on the carpet!"

He then repeatedly shouted "don’t" at Holly, who he was clearly trying to wind up but his concern was understandable. Holly was left not knowing where to look as she simply held the plate up to the camera, telling viewers: "I don’t want to hold it, I’m not going to touch it. I’m just going to read to the break."

"Be very careful… do you want to give them back?" Phil asked.

"No it’s fine, I just don’t want to move I’m just frozen on the spot!" she replied, before they paused for a commercial break.

The Queen is set to become the first British Monarch to celebrate a Platinum Jubilee, marking 70 years of service to the people of the United Kingdom, the Realms and the Commonwealth.

To celebrate this unprecedented landmark there will be a four day UK bank holiday weekend from June 2 to June 5.

The occasion is expected to be even grander than Queen Victoria’s Diamond Jubilee and it's thought more than 1 billion people could watch the event on TV.

A concert will also take place at Buckingham Palace with special guests such as Diana Ross, Queen + Adam Lambert and more will take to the stage. More information can be found here.