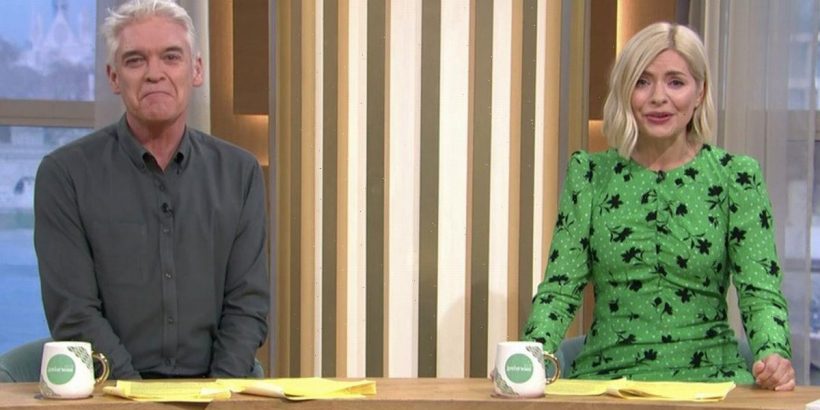 Holly Willoughby and Phillip Schofield couldn't contain their excitement over a change to the This Morning set when they returned to the show.

The hosting duo were back on the ITV series after taking time off over the Christmas period to enjoy a much-needed break with their families.

And during the cross-over with Lorraine before This Morning started, they shared their excitement after getting brand-new mugs.

Lorraine Kelly, 62, said: "Holly and Phil are back and they're here shortly, so good to see you!"

Holly and Phil could be seen sitting at the This Morning desk with their fancy new mugs.

The hosting duo have had various different mugs over the years, but the new ones were extra fancy with gold handles and a pattern surrounding the teal logo.

It was confirmed that Holly and Phil would be returning last week, taking over from stand-in presenters Alison Hammond and Dermot O'Leary.

Viewers had expected that Holly and Phil would be back after New Year's Eve celebrations, but Alison and Dermot were fronting the show for another week instead.

Taking to Twitter, one fan joked: "Holly and Phil work less than me and I'm long-term unemployed."

Another said: "Oh course Holly and Phillip are on an extended Christmas holiday."

But it appears that viewers should get used to Holly being away from This Morning.

Holly is set to take two-and-a-half weeks off as she goes to film a new BBC show.

She will be starring with Lee Mack as the co-host of Wim Hof's Superstar Survival, flying to Southern Europe later in January to film.

But Holly will still be presenting Dancing on Ice, flying back to the UK to front the skating show with Phil on weekends.