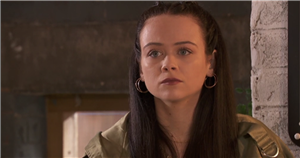 The troubled youngster has been receiving messages from an unknown contact over the past few episodes.

Peri Lomax (Ruby O'Donnell) had enough of her girlfriend's shifty behaviour and demanded to know exactly what was going on.

Juliet was horrified when Peri accused her of dealing drugs again and the pair decided to have a permanent break from each other.

Later in the episode, Juliet apologised to Peri and the pair agreed to move in together after making up.

Sid Sumner (Billy Price) welcomed Juliet to the family and she later told her friend who is behind the mysterious messages.

Juliet said: "It's my mum. She's changed her number and she won't stop messaging me. What am I going to do?"

Sid insisted that Peri should come clean to Peri while viewers at home were not surprised by the big reveal.

Taking to Twitter, one fan penned: "I knew it was Donna Marie, but why?"

Another added: "Knew it was her Mum." A third person posted: "This means Donna-Marie's on her way back, doesn't it?"

When Peri confronted Juliet over the text messages earlier this week, Juliet angrily insisted she needed some "space".

Peri only got more upset when she overheard Juliet telling Sid he was the only one who'd ever understand. With Yazz Maalik (Haiesha Mistry) feeding her suspicions, Peri immediately jumped to conclusions that Sid and Juliet were having a fling. Her allegation only drove a further wedge between herself and Juliet.

Peri admitted she may have jumped to conclusions by accusing Juliet of having an affair, but still felt betrayed that her girlfriend was shutting her out.

"I stood by you when you were in prison. I waited months so we could be together, be a proper couple," Peri tearfully told her. "But, it feels like I am still waiting!"

She then insisted: "It almost doesn't matter that you aren't having a physical affair with him. He's the one you rely on. Emotionally, I don't get a look in."

Juliet insisted she couldn't tell Peri who'd been texting her, so Peri angrily decided that they may well "need space from each other… permanently".

Will Juliet tell Peri that Donna Marie is responsible for the secret messages?

Hollyoaks airs weekdays on Channel 4 at 6.30pm followed by a first-look episode on E4