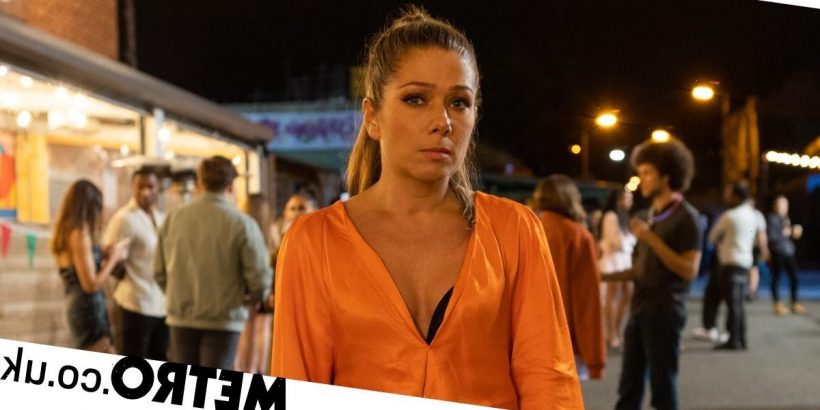 Hollyoaks has partnered with the Home Office for a series of special episodes that will explore women’s safety.

The outings of the Channel 4 serial drama, which air next week, will see Maxine Minniver (Nikki Sanderson) attacked on the way home after a fun girl’s night out.

The audience will subsequently see the character examine whether different choices she had made during the evening could have changed the outcome, as she comes to realise that she is not to blame for her attack.

The special Long Walk Home episode, which will screen on E4 next Monday (November 8), has partnered with the Government’s ‘Enough’ campaign tackling violence against women and girls (VAWG), which encourages those who witness abuse against women to intervene safely and call out problematic attitudes or behaviour.

Maxine and friends Theresa McQueen (Jorgie Porter), Verity Hutchinson (Eva O’Hara) and Zoe Anderson (Garcia Brown) enjoy a night out in Liverpool during the week in question, but Max ultimately gets separated from her friends and is thrown out of the club.

The Long Walk Home episode picks up from here, as she navigates her way home alone without money or a mobile phone.

Maxine is then violently attacked.

Romeo Nightingale (Owen Warner), meanwhile, is also out in the city on the night in question, and he travels back to Chester with a hen party he meets on his journey.

‘What happens to Maxine in town that night is completely relatable and a situation that will be recognisable to many women,’ said Hollyoaks ‘Executive Producer Lucy Allan.

‘She is alone and worried and tries to find the safest way to get herself home. Maxine does everything that women do either instinctively, or have been told to do, to keep herself safe from harm.

‘Across the week it will be made clear to the audience that the onus should not be on Maxine to keep herself safe.

‘We will also, through discussions between our characters, explore the role that other people can take in intervening in abuse and influencing peer behaviour.’

The central episode was written by Hollyoaks core team writer Jayshree Patel, who explains that it was essential to highlight the differences in the female and male journeys, both in terms of the way they approach them and their experiences during the night.

‘We’ve called the episode The Long Walk Home, but in reality the theme of the piece is essentially “Girls Just Wanna Have Fun”,’ said Jayshree.

‘Ours is a positive message – girls need to enjoy their lives, they want to go out and be free to live as joyously as they can.

‘It’s everyone’s responsibility to ensure that this can happen. In truth it should not be a lot to wish for….’.

Hollyoaks have worked with Rape Crisis throughout the editorial and filming process.

CEO Jayne Butler says: ‘All too often, men and boys are left out of the conversations on women’s safety.

‘The onus is on women to think of ways to keep themselves safe, rather than addressing the root cause of our fear: violent men.

‘This episode of Hollyoaks highlights how the narrative that by taking certain actions we can avoid rape and sexual abuse is completely false.

A Home Office spokesperson added: ‘There is no place in our society for acts of violence against women and girls. These crimes can have a lasting and severe effect on the victim as well as their family and the community.

‘No one should live in fear of abuse. We’re committed to ensuring criminals face the full force of the law and creating a society where women and girls are safe.’

Hollyoaks airs this storyline all next week on Channel 4 at 6pm with first-look episodes at 7pm, or stream them first on All4.