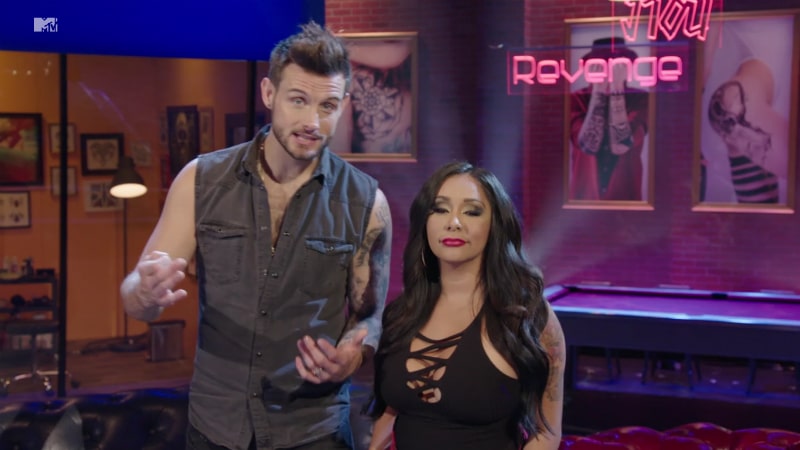 How Far Is Tattoo Far? is the exciting new show coming to MTV on Thursday nights. Featuring hosts Nico Tortorella and Nicole “Snooki” Polizzi, the newest tattoo show is sure to entertain but there’s a lot about it that you might not know.

The premise behind How Far Is Tattoo Far? is that two best friends will come on the show and choose a tattoo for each other. The person getting tattooed has no idea what their friend chose and won’t be able to see the work of art until it’s inked on their body.

This could be a lot of fun or it could be a disaster depending on how much your friend cares about your feelings compared to how badly they want to shock, stun, and get a few laughs.

MTV’s new tattoo series is formerly known as Just The Tattoo Of Us, which is a real show on MTV international and it was planned to have the same name in the U.S. version too. However, right before the series was set to air, it got a name change.

In addition to regular people who want to get tattooed together, there will be some famous faces showing up to get tattoed. Among them are Jersey Shore’s Angelina Pivarnick and Chris Larangeira, Floribama Shore’s Nilsa Prowant and Aimee Hall and Cara Maria Sorbello and Paulie Calafiore from The Challenge.

In the premiere episode, Angelina and Chris choose tattoos for each other. The How Far Is Tattoo Far? sneak peek shows Angelina looking really shocked at what her man had inked on her body. Will it be enough to land him in the dog house?

While some friends may go out of their way to shock their friend with a crazy tattoo, others have opted for meaningful ink that really moves everyone. The thing about How Far Is Tattoo Far? is that there’s no telling which direction the friend might go in choosing a tattoo until it’s too late.

As far as the tattoo artists on the new MTV series, they claim to have picked up some of the best and there are even some familiar faces among them. Melody Mitchell from Black Ink Crew joined the show as a tattoo artist and while she is instantly recognizable, you might be shocked to see that she’s shaved her head!

How Far Is Tattoo Far premieres on Thursday, October 11 at 9/8c on MTV.