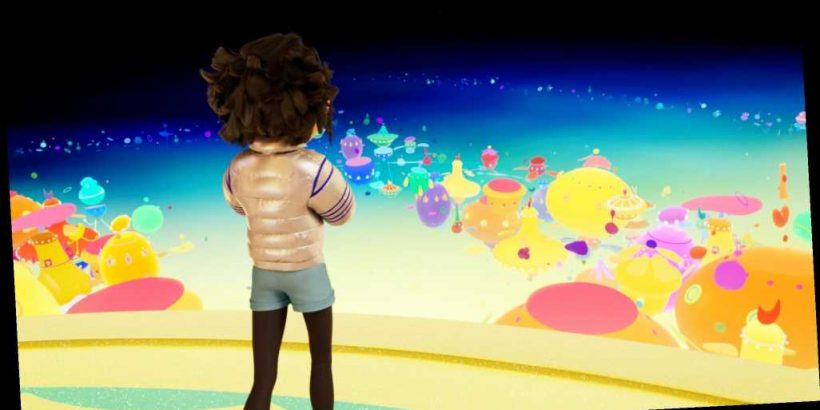 When it was time to make the “Oz”-like leap on “Over to the Moon” from contemporary China to fantasy moonscape Lunaria, Disney legend Glen Keane introduced production designer Céline Desrumaux to the iconic CD cover of Pink Floyd’s “The Dark Side of the Moon” for inspiration. “I was taken by the design,” she said. “I could see the inky black darkness for the animation with that simple prism of white light and refracted colors. He said he had no idea what Lunaria looks like, but that it needs to be as bold as that cover.”

From there, Desrumaux began creating a backstory for Lunaria, home of the towering, diva-like Moon goddess, Chang’e (Phillipa Soo). According to their update of the Chinese fable, Chang’e takes a magic potion and spends eternity on the moon longing for her lover. When 12-year-old Fei Fei (Cathy Ang) mourns the passing of her mother, she builds a rocket to the moon to enlist the aid of Chang’e.

“I came up with Chang’e arriving on Lunaria and the idea that God is creating his own kind and that everything should be formed from her tears,” Desrumaux said. “And we expanded from this, developing color and lighting and even the [glowing, gummy-like] characters of Lunaria.” When Chang’e is happy, they turn yellow, but when she gets angry, she throws a meteor shower. “They are a reminder of her sadness.” 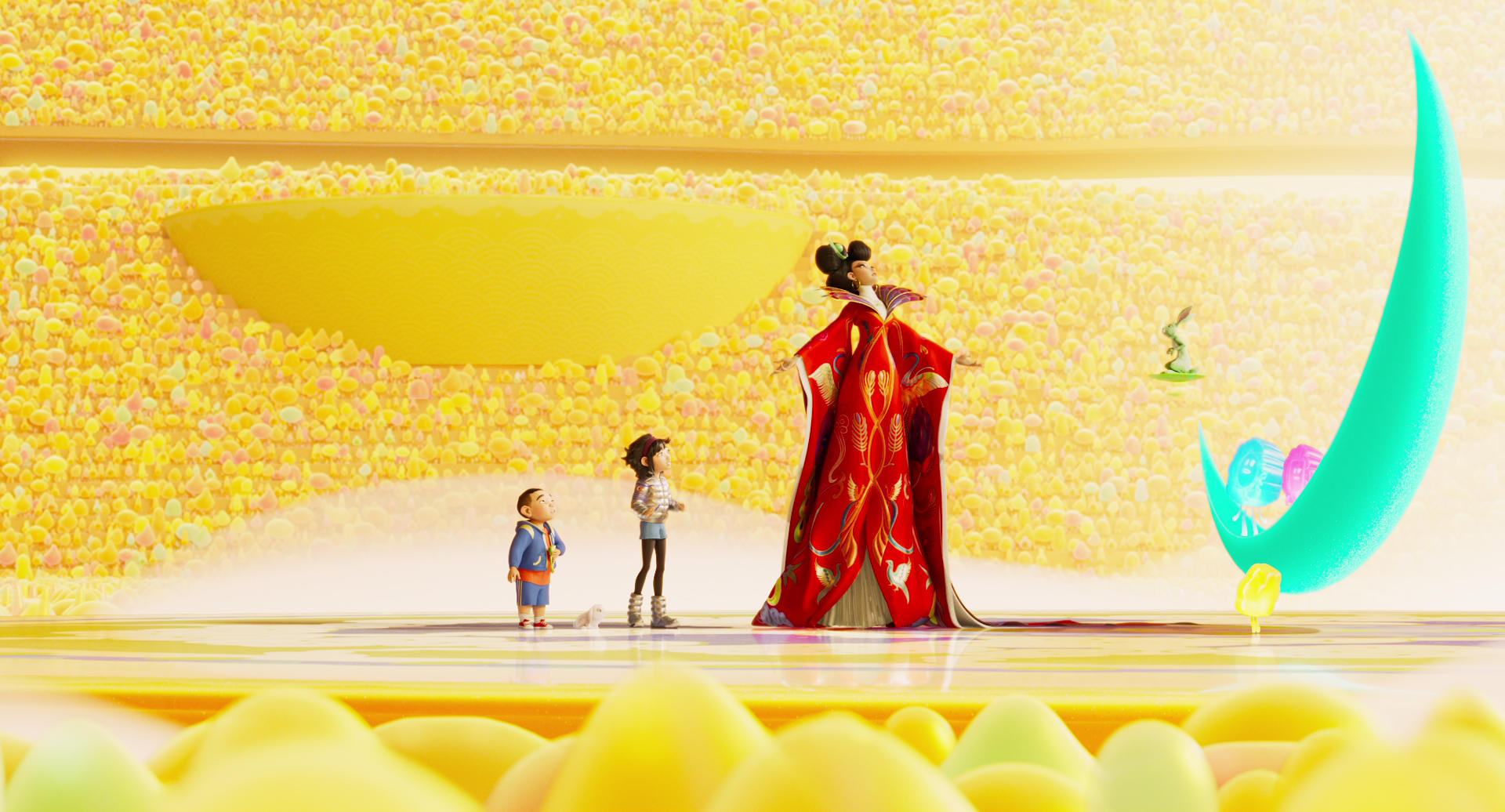 “Over the Moon” Lunaria

Director Keane instantly embraced the production designer’s concept for connecting Lunaria to Chang’e as a stark contrast to earth. “What Céline brought was her deep study into China and the little water town [Wuzhen] we visited together. She pointed out the white walls, and I said, ‘Yeah, they’re white.’ And she said, ‘No, they’re not white! They’re green and blue and gray and brown!’ She went on about the colors and the reflected light. It was so harmonious with the elements.”

And it became an epiphany when Desrumaux smartly flipped the aesthetic for Lunaria, going from reflected light to Chang’e’s sourced light. Keane then offered an additional inspiration for Lunaria: the surreal work of painter Joan Miró, who had a fondness for conveying the movement of abstract shapes. “The way Miró did his paintings, it feels like music,” he said, “and it’s full of childlike wonder. She made it all come together, and the day she showed me [the first concept] of Fei Fei standing in front of Lunaria with crazy, glowing colors, radiating light, made me laugh and then cry.” 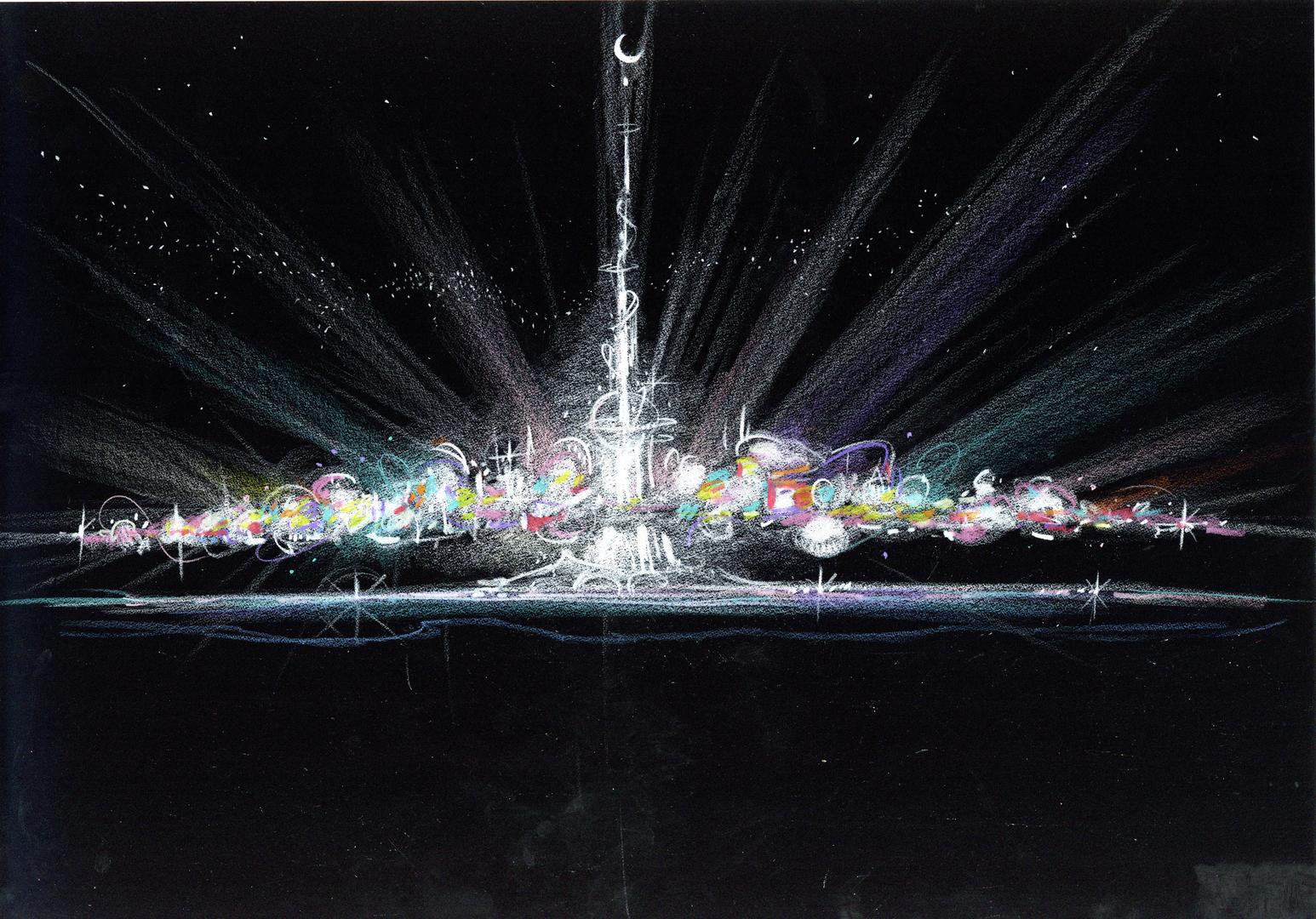 “Over the Moon” Lunaria

The production designer looked at NASA images of the lunar surface and outer space for reference, and conjured the city as a floating galaxy that revolved around the palace. The buildings were sculpted to look organic and they turned and changed profiles. “For the outside of the palace, we tried to keep the shapes simple,” she said. “One of the references were pictures of sand on ice. They look very strong but can break and because of the meteor showers.”

And then inside there was a different inspiration: The Philharmonie of Paris for the concert hall, where Chang’e performs the original song, “Ultraluminary.” “The curvy shapes of the balcony are really close to our aesthetic of the buildings in Lunaria,” Desrumaux said, “and it really gives the feeling of floating elements. The Private Chamber of Chang’e is a good example of marriage between the Lunarian aesthetic and the inspiration from Chinese culture,” she added. “We tried to keep the environment vivid and Lunarian, but we populated it with [round, spherical] props infused by Chinese culture.”

The production designer’s collaboration with the animators at Sony Pictures Imageworks was tied to the self-illuminating Lunarians and their world. They had specific rules for lighting that extended to layout and performance as well. But it was her close collaboration with Keane that provided Desrumaux with the greatest joy.

“We were discovering ourselves in China, and I got to know the man behind the animator,” she said. “It was a wonderful day when he looked at that first drawing of Lunaria. I think his brain just broke when he was laughing and crying at the same time. It was the best kind of encouragement but it was a little weird spending more time on Lunaria than on earth in this movie.”