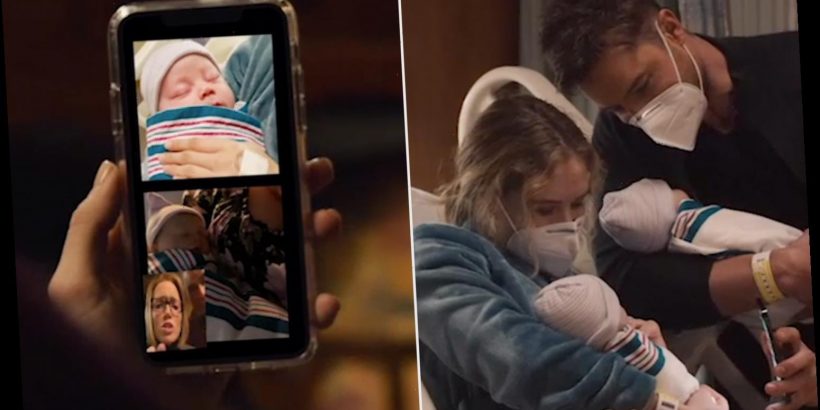 The Pearson family navigated the milestones of welcoming babies into the world — together and far apart amid the COVID-19 pandemic.

On Tuesday's episode of This Is Us, titled "In the Room," fans saw Kate (Chrissy Metz) and Kevin (Justin Hartley) witnessing the births of their kids: her second child, daughter Hailey Rose, and his twins, Nicholas — named after Uncle Nicky!— and Frances. The actor successfully made it back to Los Angeles to support his pregnant fiancée Madison (Caitlin Thompson), who fought through contractions and an epidural injection with the help of Randall (Sterling K. Brown) and Beth (Susan Kelechi Watson), who were virtually keeping Madison company during their road trip back to Philadelphia from New Orleans.

Meanwhile, at the family cabin near Pittsburgh, elderly Rebecca (Mandy Moore) and Miguel (Jon Huertas) were not only physically miles away from seeing the newborn babies, but Rebecca felt emotionally distant from her son Kevin and daughter Kate as the matriarch was unable to participate in her kids' milestones with spotty cell reception. In addition, Rebecca kept staring at a colorful "blob" handprint painting and recalled a past cabin memory with her late husband Jack (Milo Ventimiglia), whom she promised to "never miss a thing" when it came to their family.

The pandemic greatly altered how the Pearsons predicted the new Big Three being born. Kate's husband Toby (Chris Sullivan) was unable to be in the delivery room with Kate and birth mother Ellie (Annie Funke) due to COVID protocols. Instead, he waited in the parking lot, where he met a man unable to visit his COVID-stricken wife Rose who was on a ventilator.

Every family member relied heavily on technology to stay connected. And throughout the episode, audiences learned about Esther and Nasir Ahmed, the Indian-American electrical engineer, computer scientist and Professor Emeritus at the University of New Mexico, who in 1972 helped invent the Discrete Cosine Transform — the technology used for image sharing and online video-conferencing such as FaceTime, which the Pearsons depended on to communicate during their birth experiences and to introduce the babies to one another.

Below, the episode's director Ken Olin and writer Vera Herbert tell PEOPLE why This Is Us wanted to pay homage to Ahmed and the decision to portray what it's like giving birth during the pandemic. PEOPLE: The real-life story of Esther and Nasir Ahmed was really compelling. How did the idea of telling Ahmed's contribution come about?

VERA HERBERT: Dan [Fogelman] had an idea in the writers' room … and literally all of our little writers' brains Googled computer programming and computer engineering to try to figure out who might've come up with the idea of FaceTime. We came across the story of Nasir who had invented the Discrete Cosine Transform and we didn't honestly know what it was but we did enough research to realize that it's the basis of this technology. Further Googling we discovered that he lives in La Jolla, California, with his wife and we reached out to set up a Zoom. We found out they've actually been quarantining in Argentina for basically a year but we were able to Zoom with them and get their life story and relationship. It's so sweet, we thought, "Yes, this is the storyline for us."

KEN OLIN: I thought [the Ahmeds' story] was great. For me, it's strictly the challenge of taking these guest actors new to the show and make sure they feel part of it tonally, and also be authentic in terms of the period. … It was challenging a little bit visually, just to make sure that all the elements are there, but it was fun. We had a great guest cast, it was fun to do and different.

Vera, how was your video chat with Esther and Nasir last August?

VH: It was really great, that was the early stages of us trying to figure out the story. All we knew was Nasir created this programming technique and so we set up the Zoom with him. Every time we asked a question, his wife Esther would, kind of, weigh in from off screen and was very close to the Zoom, not technically on the Zoom. Finally, Dan was like, "Does your wife want to join too?" Then she fully became part of the Zoom. She's so supportive and calls Nasir a genius. They're clearly so in love. This episode also showed a really specific dynamic of what it's like to give birth these days. It's a unique time to be having a baby. What were some of the behind-the-scenes conversations about how to execute the birth stories?

KO: From a production point of view, it's really challenging. But that doesn't ever seem to deter the writers. There's a lot of things in place to keep people safe, it's been a top priority of the show to keep the cast and crew protected. We've been incredibly successful by being incredibly vigilant about the PPE and safe distancing in terms of shooting and it becomes that much more challenging when you're dealing with babies. Figuring out how we're going to do all of that and not lose the emotional immediacy of having a birth, that was challenging.

And one of the things for the writers, Dan and Vera, was we have to be responsible for what we're putting out there. … None of us have written, directed and acted in scenes where you're telling someone your life and you're wearing a mask/PPE and pulling your ears forward. Those are completely new challenges. … Originally, there was one version of the script where Randall actually flew to be with Madison in the room, and Dan and Vera came to the conclusion that you can't have a character fly across the country, jump on the plane and be in a room with someone having a birth. We can't do that so it was like, wow we're going to play 15 pages [of dialogue] on an iPad.

The pandemic was, of course, unforeseen. Would this same story, with Nasir Ahmed and the babies' birth stories, still have happened?

KO: Dan had a baby [in 2020], [executive producer] Elizabeth [Berger] is having her second baby, Mandy Moore is pregnant. This is a time where people are having babies, so that I think was always going to be what this season was about. The formation of all these characters' new families and looking at the ways you form your own family separate from your original family. I don't think the FaceTiming was a part of the original plan [laughs].

VH: By the end of last season we had set up Madison's pregnancy and that Kate and Toby were going on an adoption journey. So when we decided to include COVID in the show, it sort of was like, okay we're going to tell these stories but we're going to try to tell them in a way to show the world that we are now in.

What's next for Kevin and Madison as first-time parents, especially during the pandemic? And Kate and Toby as parents to a newborn again?

VH: Luckily for Kate and Toby, and Kevin and Madison, they all are so close and already have each other in the same city on the same coast. So they actually get to have a family unit in a way that Randall and his family on the other coast are isolated. We get to explore family dynamics, having these new babies, the different lifestyles and choices they make for their new families — which is fun.

KO: One thing to point out is the way that the writers have dealt with this, which is so brilliant. Once the decision to move forward with the fundamental characteristics of this story, which is these people having babies and at the same time, was made, they have been incredibly responsible about the obstacles presented by this pandemic. They recognized that the psychology and the emotional lives of these characters remain the same. They approach it through the lens of their own personal experiences, and I think that came through in this episode.

What's to come for the rest of the season?

VH: We're about halfway [into the season]. … We are dealing with characters who live on different coasts. We're going to continue to tell these stories of living in this real world, that we as the writers, directors and creators are all living in, of having the challenges of the COVID pandemic. We're going to continue to build these families and pay off some of the lingering drama that we still have. Kevin and Randall still need to have a big conversation about their lives, and Rebecca and Miguel will come in the back half of the season.

This interview has been condensed and edited.

As information about the coronavirus pandemic rapidly changes, PEOPLE is committed to providing the most recent data in our coverage. Some of the information in this story may have changed after publication. For the latest on COVID-19, readers are encouraged to use online resources from the CDC, WHO and local public health departments. PEOPLE has partnered with GoFundMe to raise money for the COVID-19 Relief Fund, a GoFundMe.org fundraiser to support everything from frontline responders to families in need, as well as organizations helping communities. For more information or to donate, click here.