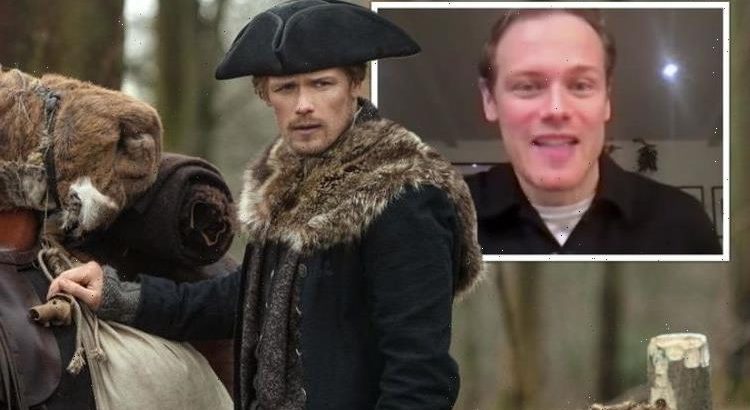 Outlander first aired on Starz in 2014 with Sam Heughan taking the role of Jamie Fraser opposite Caitriona Balfe as time-travelling nurse Claire Randall. The series is set to air its sixth series in 2022 and actor Sam didn’t imagine he’d even make it this far. Speaking on Good Morning America, the star recalled the moment he learned he’d landed the role.

Sam began: “It was a long time ago now, yeah, almost eight years and I was in a grocery store in London.

“I had a whole bag of groceries and my agent called me and I finally got the job and I dropped all the groceries and I was screaming at the top of my voice.

“I think I probably swore a lot as well but being a good Scotsman, I went and met all of my friends and we went and celebrated for a couple of days. It was a lot of fun.”

Sam will be back on screens in March as Jamie and Claire prepare for the Revolutionary War to arrive at Fraser’s Ridge.

Teasing what fans can expect, he stated: “I’m so happy we’re finally back on air after the Droughtlander.

“We’re back on in March and it’s Outlander, there’s everything there, there’s history, romance, adventure, it’s a shorter season due to Covid and some of the challenges we faced.

“But of them are longer than others. It’s just a great season, it’s dark, it’s exciting.

“The fans are going to love it.”

Fans don’t have too long to wait with Starz already dropping a first look at the new season on Christmas Day.

In the scene, Jamie can be seen talking to wife Claire about an offer he made to the men at Ardsmuir Prison.

The highlander has given the men he was with a chance to settle on the Ridge, however there’s one man who he’s not keen on having around.

But he admits to Claire he can’t turn the one man away with his wife assuring him they’ll do all they can to survive.

Going on to explain his differences with Tom Christie (Mark Lewis Jones), Jamie recalled how he learned his wife had died while in prison.

“You were there with me, at the prison, it’s what got me through it,” Jamie tells Claire.

“You are always with me. Sometimes I think you’re an angel Claire.”

Unsurprisingly, Claire then leans in for a passionate moment with her husband.

Teasing Tom’s arrival on Fraser’s Ridge, executive producer Maril Davis shared the Christies are “searching for something, whether that’s salvation, hope, or whatever it is. I’m not sure if they’ll find it”.

“But in season six we’re asking, ‘What do you do when your home turns against you?’ We’ll see how that happens in their own backyard.”