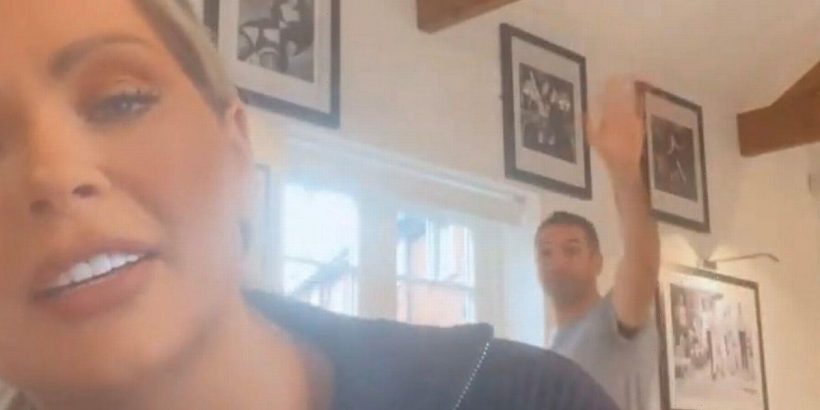 I’m a Celebrity… Get Me Out of Here!'s Nicola McLean husband stumbled into a live chat in his pants.

The reality TV beauty was chatting exclusively with the Daily Star during an Instagram Live when her partner and footballer Tom Williams accidentally interrupted the interview.

Nicola was talking to Daily Star on a live video when the father of her two boys walked through the back of her living room.

The TV star said to him: "If you're going to be in the background you have to say hi. Oh my god, you've only got your pants on."

Nicola then tried to cover Tom up as he wandered around the house and waved to the camera.

"Well yeah, because I went like that," she laughed while trying to cover the screen."

Tom is a professional footballer and plays for Hashtag United of the Isthmian League North Division.

Her youngest son then walked through and Nicola said: "Striker you have to say hi – are you watching I'm A Celeb? Who is the best person to have ever been on I'm A Celeb?

To which he responded: "Jimmy Bullard."

Looking shocked, she turned to him and said: "No, it's me! Thank you…"

The former Page 3 icon shot to fame after shooting to success as a glamour model in her late teens.

Though she says those days are over now after becoming a mum to her two boys.

When asked if she would ever do the likes of OnlyFans, Nicola revealed that it is a no-go zone.

"Absolutely not, never, secondary school is hard enough as it is, I wouldn't do that to my boys," she explained.

Nicola retired from topless glamour modeling at 23, the year before she went on I'm A Celeb, after having her first child.

She said it was "time" after beginning her Page 3 career aged 18.

Though the star revealed the money for topless shots was "dire" and ranged from around £150-£250 per paper.