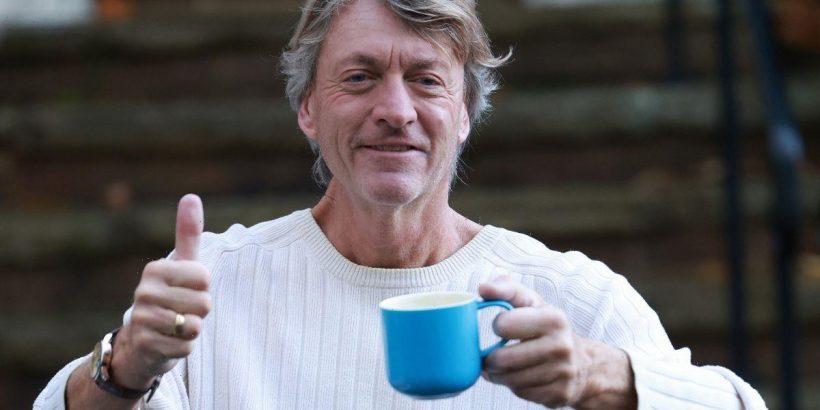 I’m A Celebrity star Richard Madeley was spotted for the first time on Friday after his early exit from the ITV show.

It was announced on Thursday that the Good Morning Britain presenter, 65, had been forced to pull out of the show after he was taken to hospital in the morning.

Richard had fallen ill while staying on-set in Gwrych Castle at the ITV show’s North Wales location and due to breaking the Covid bubble with his visit to hospital, he had to leave the camp.

The presenter, who is said to be "livid" about not being able to return to camp, appeared in good spirits on Friday as he flashed a grin and gave a thumbs up.

Richard was seen wearing a white jumper and dark trousers as he sipped on a hot beverage outside following his early departure from I'm A Celebrity.

Sharing an official statement to his Instagram page earlier on Thursday, Richard explained that he was “gutted” but knows his early departure is for the best.

“Hello all!” the star began. “Richard here – firstly just to say that I’m absolutely FINE. I started to feel briefly unwell in the small hours of the morning and was taken to hospital as a precaution.

“By leaving the camp, I had consequently broken the Covid ‘bubble’ and as such I’ve had to leave the castle and all the wonderful celebs that remain in the camp,” Richard continued. “Obviously I’m gutted to be leaving so soon but the safety of all the campmates is the number one priority.

“I’m incredibly excited to watch their journey continue…even more so at the prospect of being somewhere a little warmer than Gwrych Castle,” the star went on, going on to thank all the friends and fans who have supported him on his journey on the show.

“Our strict covid protocols means Richard has sadly had to leave the show as he is no longer in the bubble the celebrities form when entering the castle,” a representative for the show stated. "He has been a truly brilliant camp mate and we thank him for being part of this series."

They also revealed that fans shouldn’t expect to see the campmate replaced by any other celebrities.

Addressing his exit on Thursday's show, Ant and Dec admitted they were "gutted" over his early departure as they revealed he would be returning on Friday for an interview.

I’m A Celebrity… Get Me Out Of Here! continues to air at 9pm on ITV and ITV Hub every night.

For all your latest updates on I’m A Celebrity… Get Me Out Of Here! , sign up to OK!'s daily newsletter.