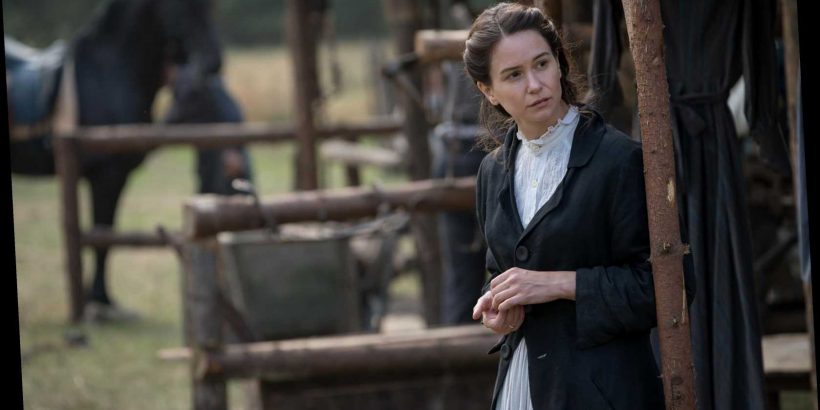 Katherine Waterston is as fatigued as anyone by what she describes as “the absence of flow” created by a life lived on Zoom. But even from a virtual interview out of her London home, close to where she’s filming the third “Fantastic Beasts and Where to Find Them,” the actress is poised, curious, and overflowing with openness about her experience filming “The World to Come.”

“Paul really did pluck me from obscurity,” she said of her breakout role in the shaggy 2014 Thomas Pynchon adaptation, where she starred as the elusive femme fatale Shasta Fay, ever out of Joaquin Phoenix’s reach in a haze of pot smoke and noirish wiles. Talking to Waterston, one doesn’t get the sense that she leaned on nepotism just because her father, Sam Waterston, has been a celebrated actor for decades. “I was making my way like a scrappy underdog actor in New York does, job to job,” she said. “Sometimes a TV show or a movie would let me have a few lines, but mostly I did theater. I was getting to that point where I thought that would be it. That was okay. It’s a tough way to live, but I had a lot of amazing experiences that way.”

Waterston carved her way through roles such as on HBO’s “Boardwalk Empire” (“I wasn’t in that at all. I shot a dog on that show. I didn’t do anything.”), playing Chrisann Brennan in “Steve Jobs,” and as Elisabeth Moss’ bestie on edge in Alex Ross Perry’s Polanski-esque thriller “Queen of Earth” (Manohla Dargis called her a “Modigliani in motion”). But even before emerging as the secret-weapon star of films like the “Harry Potter” spinoffs, Ridley Scott’s “Alien: Covenant,” and on HBO’s popular 2020 miniseries “The Third Day,” her earliest experiences were most formative. She said she learned a “great deal from playing lawyer number three in ‘Michael Clayton,’” prior to “Inherent Vice,” “where you’re on set in a way where people aren’t really paying attention to you, but you can watch everything. But without a doubt, Paul and [casting director] Cassandra Kulukundis gave me my career. I am forever indebted to them.” 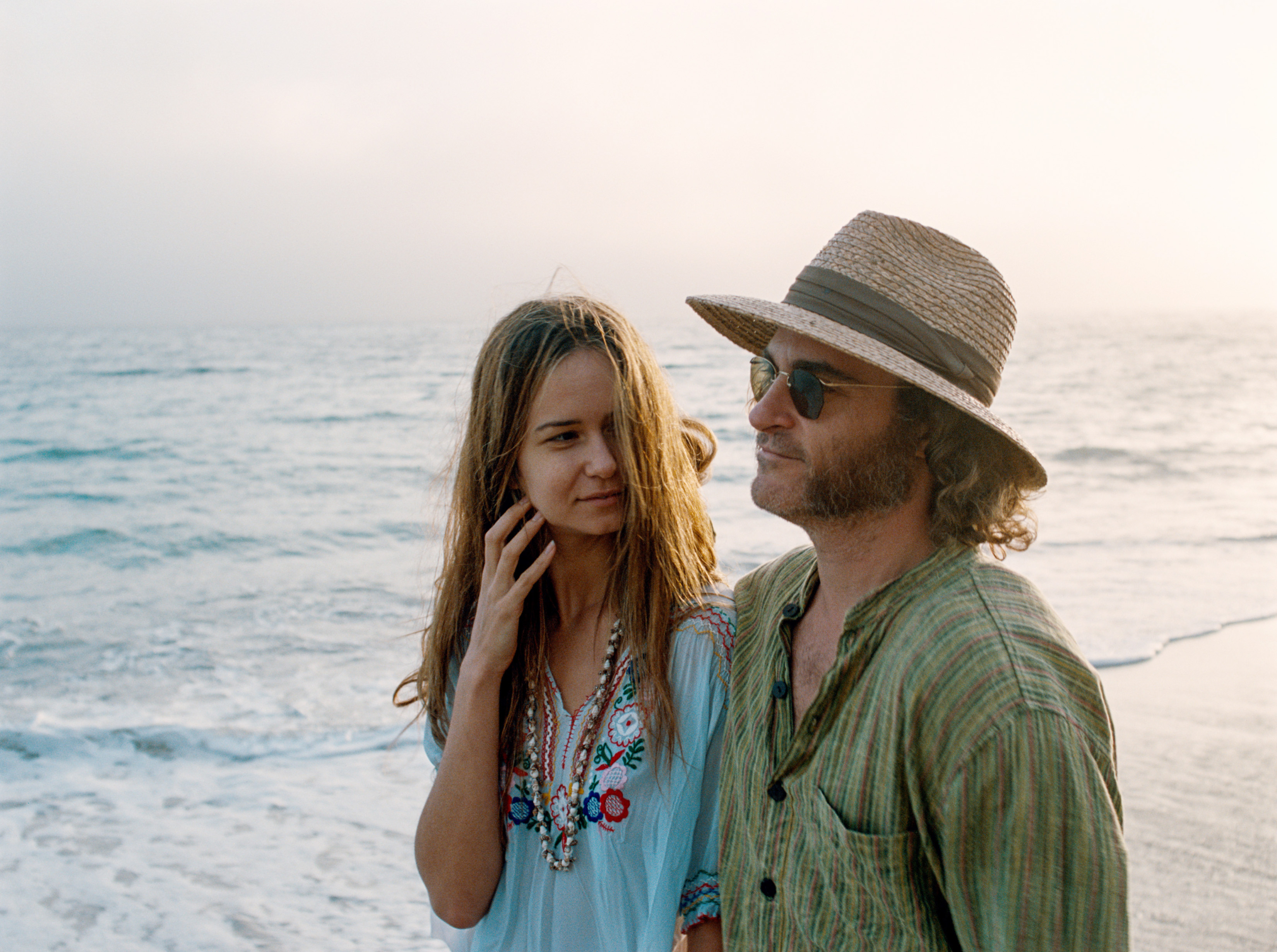 The lightning-in-a-bottle experience of making “Inherent Vice,” Waterston said, is the kind she’s been chasing ever since. “It was Los Angeles, but it was a similar feeling to ‘The World to Come’ in that it just felt so incredibly focused. There is nothing that feels better than that. All I did was hang out as this character, and get up in the morning and do whatever I think is best to get me in the place to play her, and I don’t get sick of her, I don’t get distracted, and I just want to camp out in that world.”

Indeed, director Mona Fastvold’s “The World to Come” afforded Waterston and her co-stars Vanessa Kirby, Casey Affleck (who plays Waterston’s husband), and Christopher Abbott the golden, elusive chance to fully sink their bodies and souls into the landscape of the movie, for which they lived on location in rural Romania throughout production in 2019.

“There was nothing where we were,” she said. “We lived, probably as the crow flies, a mile from set, maybe less. It was about a 20-minute drive, but it was so mountainous. We had to weave our way down these curvy mountain roads. But that was it. That 20-minute drive. This tiny piece of the world, we just hunkered down there.”

The cast lived and shared meals together during the making of “The World to Come,” and immersed themselves completely in the environs of their characters, milking cows, braving the elements, trudging through the muck, absorbing the smells pouring from the farm.

“If I wasn’t working, I was sleeping,” Waterston said. “The wifi was terrible. There wasn’t a lot of reading the news on our phones. I don’t like to do that stuff on set anyway, but even afterwards, we were just kind of with each other. It was a wonderful excuse to get away from the modern world. Probably it was one of the things that first attracted me to the script.” 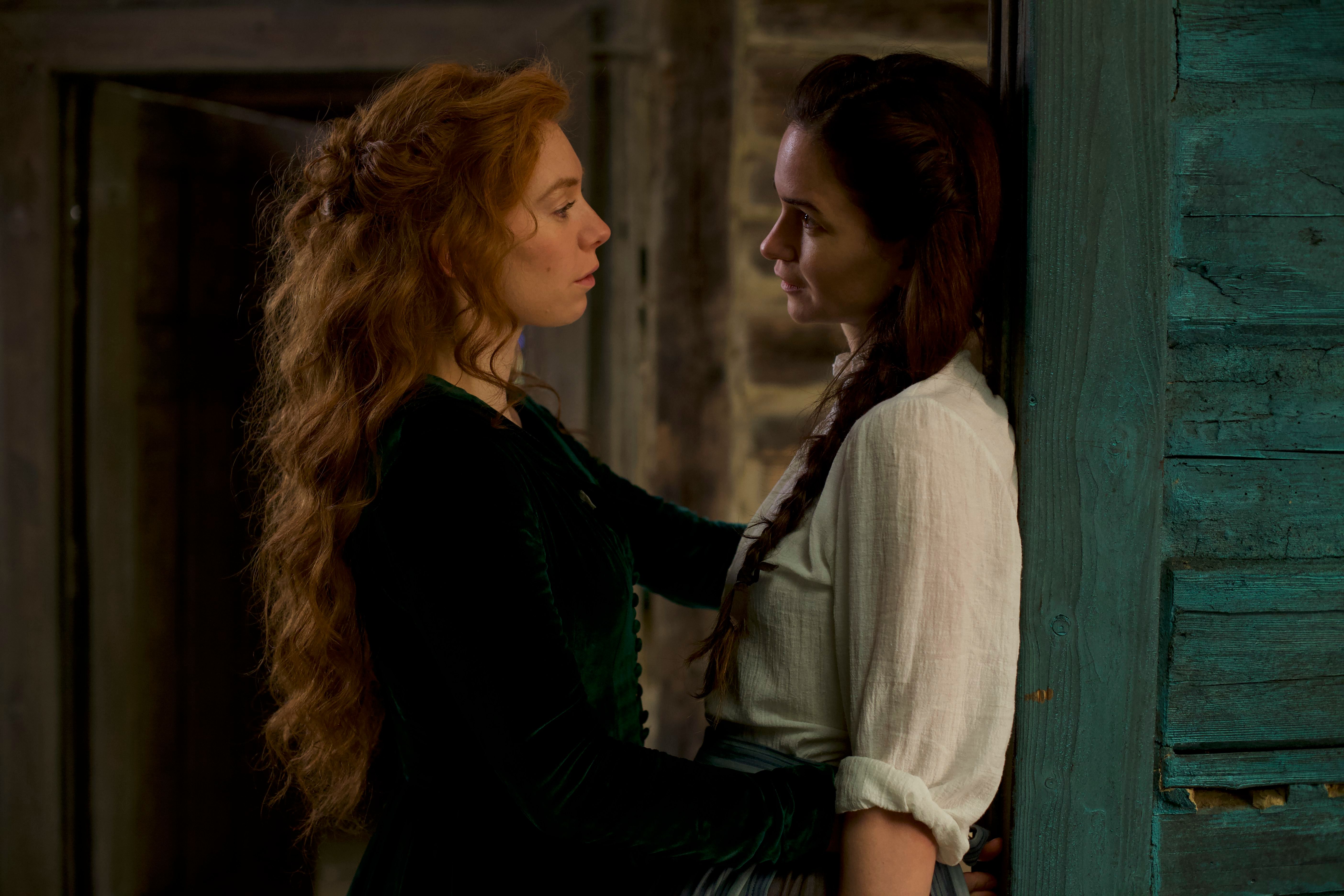 “The World to Come”

That script, written by Rob Hansen and Jim Shepard from Shepard’s own short story, also faced Waterston with one of the most harrowing challenges of her career: Her Abigail, grieving from the recent loss of her child to the perils of pastoral life, must carry the entire movie with a florid, personal, and highly literate voiceover narration that provides the soundtrack to the film’s inner emotions. Lines like “my heart is like a leaf borne over a rock by rapidly movie water” ring with the poetry of a great, undiscovered book, or someone’s private diary entries calling out from the void.

“What really excited and struck me about it right away was how intimate, how deeply interior that voiceover read on the page. It’s like when you discover a great novel, and you feel inside someone’s experience, and their mind,” Waterston said. “When you read a great novel, it’s a voice you’re hearing within your own mind. What does it sound like? How do you put voice to those private thoughts? Should it be different from the speaking voice of this character?”

Waterston said she worked on it “tirelessly” before she arrived on set, because one question was haunting her: “What is this voice? How private can I make it sound?” She had the luxury of having the script for a year before shooting, and so, she said, “I just recorded the voiceover all the time. I play it back and shudder in horror and delete it, and think, ‘Oh my god, I’m never going to get there.’ Because I did that for so long, by the time I was laying down the final recordings, I’d been saying these words for two years, and on set while we were shooting.”

She added that the voiceover, plaintive ruminations from her character’s volcanic mind, “wasn’t an afterthought. It wasn’t smacked onto the script.” While filming, Fastvold and her cast choreographed shots alongside scratch recordings of the voiceover to achieve a harmonious rhythm between page and screen. As for the experience of listening to her own voice played back to her? “No one will ever get used to that,” Waterston said. 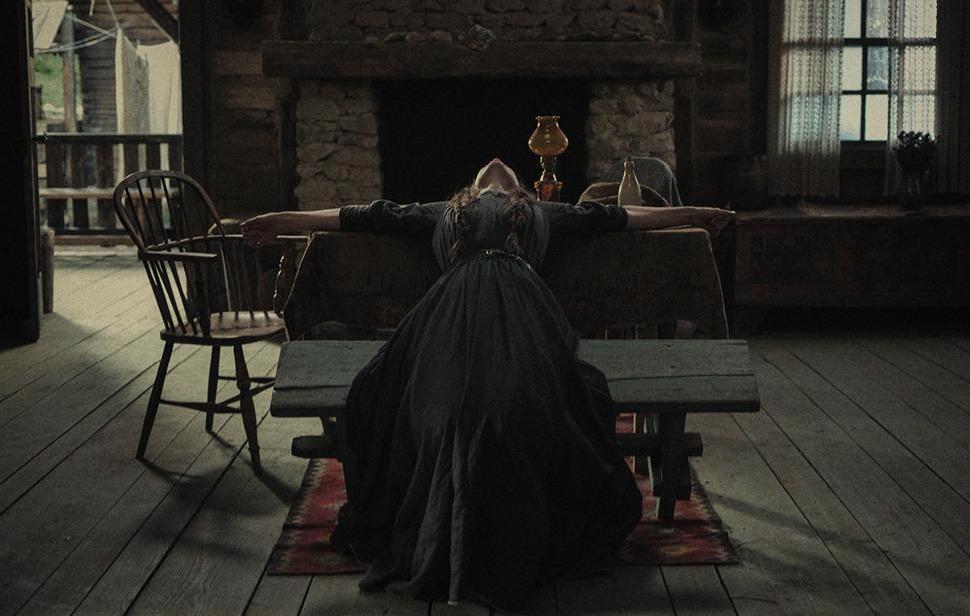 Katherine Waterston stars in “The World to Come.”

There’s a scene where Abigail finds her romantic feelings for Tallie (Kirby) finally validated after a private exchange that releases half a movie’s worth of simmering tensions. After Tallie, confirming her feelings, leaves Abigail’s country cabin to go back to her the possessive, spiraling energy of her husband (Abbott), Abigail, riding on high, splays her body across the kitchen table in ecstasy, reciting, “Astonishment and joy. Astonishment and joy.”

“I just made that up,” Waterston said of her blocking, a full-bodied and almost dancelike incantation of Abigail’s waxing desire. “It might have been some subconscious response to this line of voiceover that was on my mind all the time, which is that Abigail described herself as ‘a pot-bound root all turned in on itself.’ It’s just one of those beautiful requited love scenes.”

“That is the scene where they realize the other shares the feelings,” Waterston said. “Experiencing that kind of completely requited love is such a glorious and totally liberating feeling. This love story is so much about recognition. She sees who I am, and she loves me anyway. What does that mean for the pot-bound root?”

“The World to Come” is playing in select theaters and now available on VOD from Bleecker Street Films.