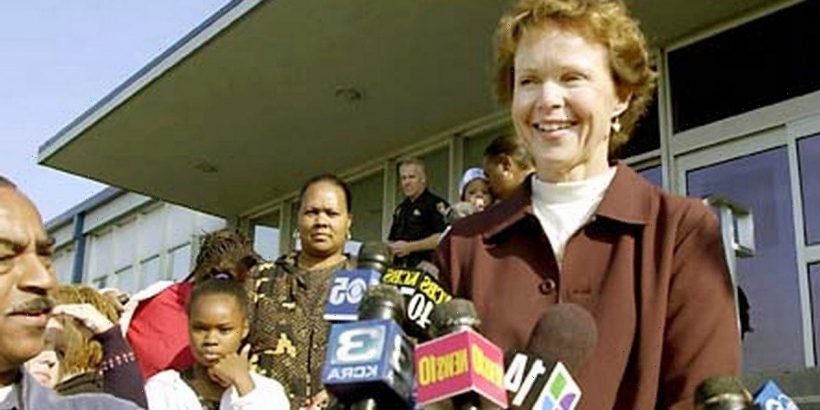 Unsolved Mysteries has gripped viewers for more than four decades as the nail-biting series explores mind-boggling cases which have perplexed detectives for years.

But until now, it wasn’t known just quite how many mysteries the beloved TV series had solved across its nearly four-decade reign.

Since its start in 1987 and end in 2010 with the show returning to screens following the Netflix reboot last year, the show has successfully solved more than 260 cases.

From grisly murders to baffling mysteries, the fan-favourite show has helped bring closure to hundreds of families all over the globe.

As the new series drops on the streaming platform, Daily Star has taken a look inside some of the solved mysteries which previously left families scratching their heads.

The murder of Daphne Boyden and her son Lathan ‘Young Lay’ Williams is a Bay Area rapper who has worked with some of the greats including Tupak Shakur, Mac Dre and Ray Luv.

Although his music career looked like it would take off in the mid 1990s, his name would soon be forever linked to a brutal murder and kidnapping that took place on May 17, 1996.

Despite the fact that the musician was never even suspected to be involved in the horrific crimes, his future as a musician soon plummeted following the devastating crime.

Earlier that month, his- 17-year-old girlfriend Daphne Boyden had given birth to his son who they named Le-Zhan.

At the time, the new mum had been living with her grandmother Riva who left for her weekly bingo game on that fateful day. But when Riva returned home from her bingo, the elderly woman found her house on fire, her granddaughter shot dead and her great-grandson missing.

The teenage girls were allegedly seen fleeing from the house before it was set alight, but police had no leads until Unsolved Mysteries aired an episode featuring the Boyden case on November 22, 1996.

But it would take another six years before there would be a break in the case, after the show received an anonymous tip back in 2002 that led investigators to Latasha Brown. Brown – who was later proven to be one of the coldblooded killers – had been raising Le-Zahn as her own son living in Vallejo, California just two miles away from where his mother had been killed, according to SF Gate.

Ocianetta Williams – who was Brown’s cousin – was later identified as Boyden’s second murderer, with authorities believing that Brown had a previous relationship with the rapper.

It is understood that jealousy drove the two to murder Boyden and kidnap her son who they raised until he was six years old.

Latasha Brown’s mother was also arrested on child concealment charges which Ocianetta Williams was sentenced to 13 years behind bars for manslaughter and kidnapping charges.

Latasha Brown was sentenced to 37 years to life for the murder, according to Times-Herald, with her mother Dolores serving a year for her role in keeping Le-Zhan concealed.

Thankfully, the tot was reunited with his birth family after he was found in 2002, but rapper Young Lay wouldn’t get to meet him for quite some time.

Back in 1999, the devastated dad was sentenced to a 12-year prison sentence for his role in an armed robbery, but he was released in 2010 where he finally reunited with his long-lost son.

The gruesome case of ‘Gabby’s Bones’

In the show’s fifth series, puzzling care of ‘Gabby’s Bones’ hit our screens which involved a man known only as ‘Gabby’ and his generous neighbour Newell Sessions.

When ‘Gabby’ moved out of his Wyoming home back in 1986, Sessions offered a helping hand as he stored some of his pal's belongings in the back of his shed, according to VICE.

One of the odd items that he housed in his shed was an antique footlocker which was forgotten about for six years.

After more than half a decade, curiosity took over as Session’s eventually opened the trunk with a blowtorch to discover a complete human skeleton decomposing inside.

Sessions, went on to describe to chilling conversation he had with his former neighbour, saying: “He acted probably as surprised as I did when I opened the trunk, that he couldn’t believe it.

“He thought I was kidding him, and I told him, ‘No, I’m not kidding with you. There is a human skeleton in there!’.” An autopsy later confirmed that the bones belonged to a male thought to be in his 50s or 60s who had been shot dead after his scans revealed a .25 calibre bullet still lodged in his head.

After further investigation, the bullet was taken from a weapon that was first manufactured in the US at the beginning of the early 1900s, according to Des Moines Register.

Both ‘Gabby’ – who was later identified as John David Morris – and Sessions denied knowing anything about the suspicious circumstances. ‘Gabby’ went one step further after he pointed out that the trunk – which he claimed he bought at a car boot sale – was used in one of the World Wars.

He claimed that this fact should immediately exonerate him due to the fact that he was a child during World War II.

In February 1993, Unsolved Mysteries aired an episode titled Gabby’s Bones which mentioned a grocery bag from an Iowa supermarket which was found among the items in the locked box.

This prompted a young woman named Shelley Statler to call in to investigators to see if they had found the remains of her grandfather Joseph Mulvaney – who had mysteriously vanished decades earlier.

Her grandfather was last seen in Iowa back in 1963, who was living with his wife, his three children and his step son – John David Morris – who was 16 years old when Mulvaney disappeared.

After four years of constant back-and-forth with investigators, Statler succeeded in obtaining a DNA test for the bones, and in 2017, it was confirmed that the bones of the mystery wan was indeed Mulvaney.

Although Mulvaney – who was a World War II veteran – was given a full military funeral in 2019, the mystery of who killed him remains unsolved.

However, Statler admitted: “I do believe John Morris knows more than he is saying, but I don’t believe he pulled the trigger.”

The case of the stolen children Her case had been heavily featured on Deadly Women and the Southern Hollows podcast, but it wasn’t until the macabre case featured on Unsolved Mysteries that the case gained notoriety.

Beulah George ‘Georgia’ Tann was born in 1891 in the heart of Mississippi where she started out life as a social worker before she became a receiving director at the Mississippi Children’s Home Society.

But it was her move to Tennessee Children’s home that cemented her place in American history as one of the most renowned child traffickers in the US. In 1924, after making aggressive moves to take over the entire organisation, Tann started trafficking children in order to bring in more money into the business.

Because child trafficking wasn’t well known in the early 20s, her sick criminal enterprise went under the radar by local law enforcement.

Another factor that kept her name off the suspect list was her slew of celebrity clientele at the time, such as Joan Crawford and Dick Powell and powerful politician E. H. Crump.

With her ruse going unnoticed, the manipulative children’s home employee stole approximately 5,000 children during her reign of terror – including WWE legend Ric Flair. It is understood that she pocketed more than $1million in her criminal efforts with one key factor in propelling her black-market child adoption scheme remaining under the covers was her deal with the powerful politician.

According to Insider, Crump offered Tann protections in exchange for payments but by 1950, he started to lose his political power which led to the downward spiral of her horrific trafficking business.

The Tennessee governor Gordon Browning asked a lawyer to investigate the Children’s Home and Tann herself where he later unearthed her cruel crimes in September that year. Unfortunately, Tann never faced justice – after she died of cancer just a few days after her crimes were exposed to the public, which left a slew of unanswered questions about the fates of the stolen children.

Decades later, on December 13 1989, Unsolved Mysteries explored the extent of her criminal web which featured her political connections, the physical and sexual abuse of children in addition to a slew of other unspeakable crimes.

The episode triggered more than 600 phone calls from viewers who believed they were part of Tann’s sick trafficking ring. Thankfully, 50 of those calls proved to be fruitful, as the callers were later reunited with their long-lost family members just months after the episode aired.

One of the most famous cases that Unsolved Mysteries solved as a result of the mind-blowing episode was the case of Alma Sipple.

Back in the 1940s, her daughter Irma had been taken after being told she would receive exclusive “medical care”, but after Irma left with Tann she was never seen again.

However, Alma watched the Georgia Tann episode and called the volunteer agency that was hoping to reunite the families who were divided by Tann through her black-market adoption agency.

According to The Los Angeles Times, Sipple was ultimately reunited with her daughter who went by the name of Sandra Kimbrell after 44 years apart.