Note: The following article contains discussion of sexual assault that some readers may find distressing.

ITV continued its true crime series with a baffling documentary on Wednesday (October 10) that left viewers with far more questions than answers — the provocatively titled Am I a Murderer?.

The channel is fresh off having Good Morning Britain‘s Piers Morgan and Susanna Reid investigating some truly brutal crimes, but turned to TV detective Lesley Sharp, of Scott & Bailey fame, to narrate one of the most bizarre murder stories in recent memory.

In the show, Janet Holt confessed directly to camera that she trapped and murdered her business partner, farmer Fred Handford, in 1976, and disposed of his body as revenge for raping her. Janet claimed to have repressed these memories, and only recovered them after years of psychotherapy.

The trouble is that police say there’s absolutely no evidence that she’s responsible for Handford’s death. His body has never been found and, when she led them to the site where she supposedly got rid of the body in Derbyshire, forensic archaeologists found absolutely nothing.

“Either the location’s wrong or it hasn’t happened the way Janet’s said,” detective investigator Paul Callum insisted in the film. 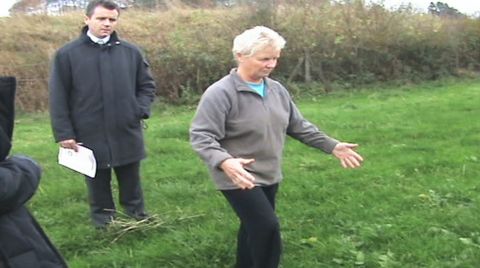 Even more confusing, Fred’s family believe Janet was the killer and acknowledge that the farmer had a history of domestic violence but won’t concede that he raped Janet.

In the end, Janet was ultimately jailed for a series of financial crimes totalling £50,000 committed in “ever-increasingly brazen” ways, which she blames on the lingering trauma of suffering sexual assault.

So, after all that, what new breakthroughs did the documentary uncover about the murder itself? The truth is there still doesn’t seem to be any consensus about what happened to Fred at all (warning: NSFW tweets below):

Will we ever really know what happened? Am I a Murderer? aired on Wednesday night on ITV.

Rape Crisis England and Wales works towards the elimination of all forms of sexual violence and sexual misconduct. If you’ve been affected by the issues raised in this story, you can access more information on their website or by calling the National Rape Crisis Helpline on 0808 802 9999. Rape Crisis Scotland’s helpline number is 08088 01 03 02.