James Martin was joined by Sir Cliff Richard on his self-title cookery show. He also had a host of chef mates help him tempt ITV viewers to get into the kitchen and cook and during one segment with baker French Richard Bertinet watching from the sidelines, James tried to pronounce a French word, and the two were at loggerheads with one another.

“We’re kicking today off with a halloumi chicken schnitzel, the whole point about this is really good quality ingredients,” James began.

“And we’re going tot talk about the ingredients a little bit later, but I want to get these on and pan fried first of all.

I’ve got some beautiful butter, gorgeous halloumi over here. What I’m going to do first of all, is pan fry this halloumi.

“So I just want to get a bit of colour in it,” he continued. 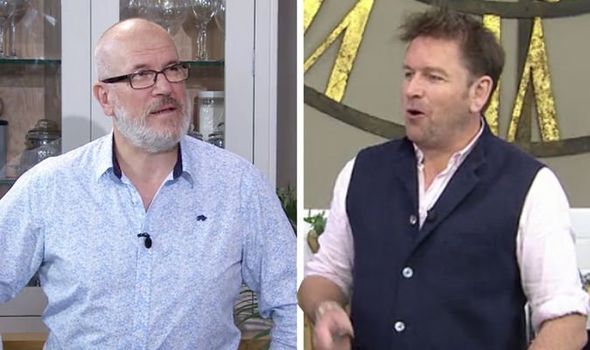 James then explained to those watching at home: “Often when you do a schnitzel you put the cheese in there without a little bit of colour, but I think this needs a little bit o colour.

“We’re going to take our nice bits of halloumi – you can tell how good this is because of the colour of it.

“So many times, halloumi is that white colour, and you can use it as a hockey putt – even after it’s cooked as well! Some of it’s horrific! It’s like chewing on a bit of rubber.

“But this is off the charts!”

He then placed the halloumi in the hot pan and said: “We’re going to turn out attention to the chicken which we’re going to open out a bit. 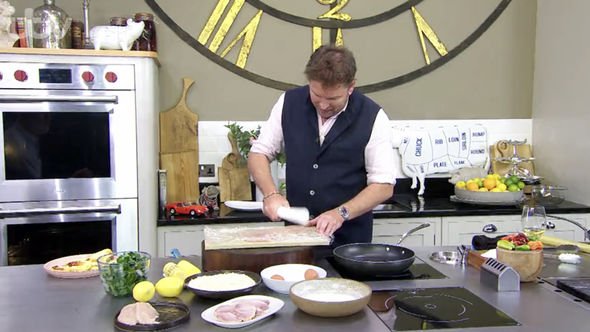 “Take the skin off them, and the fillets been removed as well, what you want to do is – what do the French call this?

“Paillard, paillard? When you open it all up into a parcel? James turned to his guest chef and asked.

“Your accent is bad, what did you say?” Richard remarked.

“What do you mean my accent is back?” James hit back. “You’ve been brought up in Watford all your life, you’re just pretending to be French. 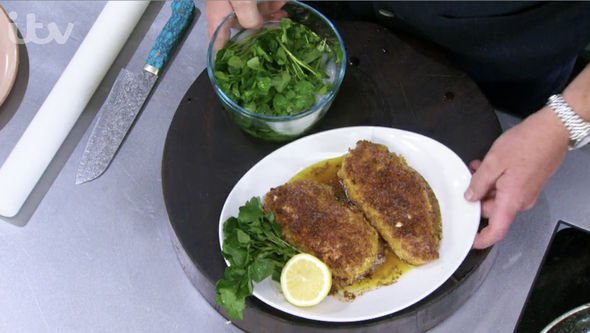 “What do you call this when it’s open? Anyway…”

The chef then showed those at home how to open the chicken breast in a heart shaped parcel.

Richard then pronounced “paillard” the correct way for James.

“Is that what it’s called?” The host remarked. “Either way, between the two of us we ain’t got a clue.”

By the time they had worked out the correct way of saying it, the halloumi was finished cooking in the pan and he moved it across to a plate.

The next step was to bat the chicken out between two pieces of clingfilm.

“The whole point of this is you want it nice and even to cook.” James explained.

He then placed the halloumi inside the chicken and rolled it up, before a three-step breadcrumb was added.

James Martin’s Saturday Morning airs today at 9.30am on ITV.