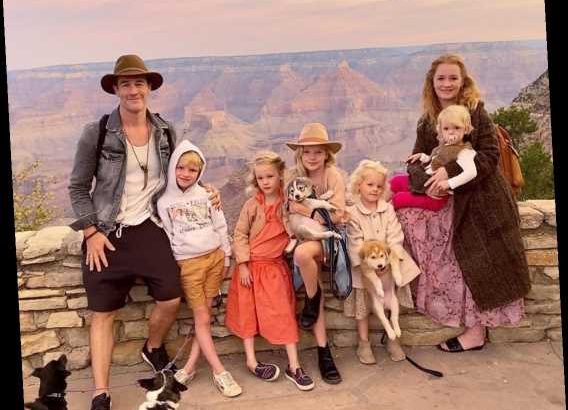 James Van Der Beek is excited to leap into his 44th year of life!

In celebration of his birthday on Monday, the actor posted an Instagram video of himself leaping across the screen in slow motion.

"Creativity used to just be my joy. Then, at some point, it became the means to an end. Now… I've come to recognize joy as the end – and creativity as the key," he wrote alongside the video.

The actor, who shares five children —  Gwendolyn, 2½, Emilia, 5 later this month, Annabel Leah, 7, Joshua, 9 later this month, and Olivia, 10 — with wife Kimberly, said that inviting his "creative spark" into everything he does makes him a "better" husband and father.

"With my forties has come the recognition that I'm a better father, better husband, better human when I open my heart to that creative spark and invite it into everything I do," he continued.

Added Van Der Beek: "Because it doesn't matter the medium, the venue, or how it's received… the magic is being in the flow."

Over the past year, the Dawson's Creek alum and his family have experienced some major life changes. In September, he announced that they were moving from Los Angeles to Texas by sharing several photos of their empty house in Beverly Hills. "Sometimes a fuller life begins with an empty house," he captioned the shots. "Leaving Los Angeles incredibly grateful for all the friends and memories we've made here. Onto the next big adventure! ❤️😊."

Once they'd arrived, he opened up about what led to his decision to relocate his family, saying the past year had come with some "drastic changes."

Alongside Instagram photos of his kids exploring their new home, Van Der Beek began in the caption, "And… we've landed."

"In the last ten months, we've had two late-term pregnancy losses, each of which put @vanderkimberly in the hospital, we spent Christmas break thinking she had a tumor (the doctor was wrong, thank god), I was prematurely booted off a reality dancing show I was favored to win in front of the whole world, and my mom died," he shared.

"And a shut-down," he continued, referencing the ongoing COVID-19 pandemic. "All of that led to some drastic changes in our lives, and dreams, and priorities… and landed us here."