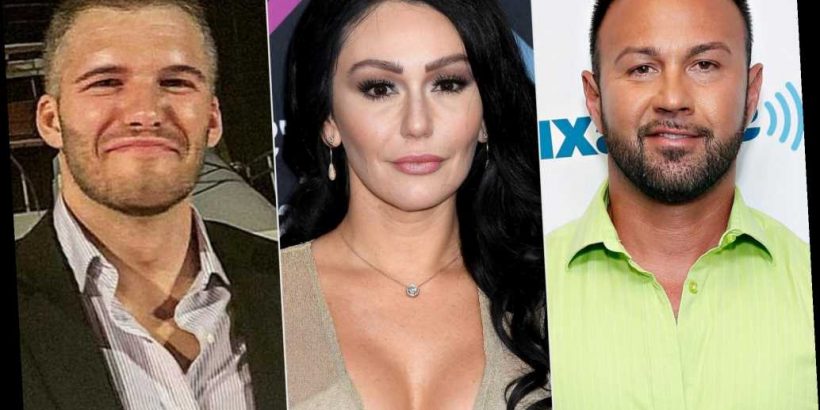 Jenni "JWoww" Farley's ex-husband Roger Mathews wishes her nothing but the best in her relationship with fiancé Zack Clayton Carpinello.

Mathews weighed in on the couple's recent engagement on Thursday's episode of his podcast, Champ and the Tramp, saying he's "truly happy for them."

"I'm happy for her, man. I'm happy for them," he said in a clip from the podcast posted by TMZ. "I don't know Zack well, but what I do know of him — he's not a very talkative guy, it's hard to have a conversation with Zack because he doesn't talk much, so it's kind of hard to get to know him, but, you know, I talk to my kids. And I don't ask direct questions but from what I know, he's good to my children."

"Jenni seems very happy, they seem very happy together," Mathews continued. "I have no reason to have any beef with him whatsoever."

Farley, 36, announced her engagement to Carpinello, 26, on Instagram Tuesday. The Jersey Shore star and the wrestler have been together since 2019.

Farley filed for divorce from Mathews, 45, in September 2018 after almost three years of marriage. They finalized the proceedings almost a year later, in August 2019. The two share daughter Meilani, 6, and son Greyson, who will turn 5 in May.

Farley and Mathews' split was tumultuous, with the reality star filing for a restraining order against him two months after the divorce filing, after they got into an argument.

She also accused him of physical and emotional abuse in a lengthy statement shared on her personal website, releasing footage in January 2019 that allegedly showed Mathews attacking her. Mathews denied the allegations, and the exes eventually managed to put the animosity behind them.

"You know, listen, we went through our s—," Mathews said on Champ and the Tramp. "We went through some nasty s—, as many divorces are, but we live very public lives, so it became public. And I take an incredible amount of responsibility for that. I did s— I should have never done. I'm sorry it, I went through all the channels I think that I had to go through to become a better person and work on myself, so why am I going to have resentment?"

"We're done. Our time together is over, with the exception of being parents to two wonderful kids. I would never not want her to move on with her life and be happy," he continued. "He's a good guy and I wish her all the best."

Mathews has also moved on and has been dating New Jersey hairstylist Danielle Miele for over a year. As for whether he sees the two getting married?

"Only an idiot would say 'never' about anything. So I would never say never, but I'm very content," he said. "My role in life is to be a dad. I'm very happy in my relationship, but we're not talking about engagements or marriage."