Alex Trebek, the long-running host of the iconic trivia gameshow “Jeopardy” has died, the show announced Sunday afternoon. He was 80.

Trebek had been courageously documenting his life with cancer after being diagnosed in March 2019. He attended the TCM Classic Movies Film Festival in April of that year, giving a heartfelt and emotional introduction to the feature “Wuthering Heights.” He celebrated one year of fighting cancer — prognosis for survival after 12 months is usually 18% — in March 2020. Because of the global health pandemic, and to protect Trebek, the game show filmed without audiences before production was suspended indefinitely.

Alex Trebek was born George Alexander Trebek in Ontario, Canada on July 22, 1940. He started working at the young age of 13 as a bellhop at a local hotel where his father worked. He would graduate from the University of Ottawa in 1961 with a degree in philosophy. He’d always been interested in broadcasting and before graduating took a job at the CBC (Canadian Broadcasting Company).

His first hosting job was on a Canadian music program called “Music Hop” in 1963 and he’d later host a high school quiz show called “Reach for the Top” in 1966. Generally, though, he was a music host for the CBC throughout the late ’60s before he moved to the United States in 1973. Once there, he took to hosting a game show called “The Wizard of Odds” for NBC, but it didn’t last more than a season. He’d gain some attention as the host of “High Rollers” for NBC throughout the 1970s while simultaneously filming episodes of “The $128,000 Question” in Canada. He was one of just two hosts known for doing shows in both countries.

As he worked on his game shows, Trebek was also a popular panelist on other prominent game shows of the era, like 1980’s “Card Sharks,” “The Magnificent Marble Machine,” and “To Say the Least.” With the cancellation of “High Rollers” in 1980, Trebek went from a series of different game shows, such as “Battlestars,” “Pitfall,” — which filmed in Vancouver — and “Lucky Numbers.” None of them were successes. 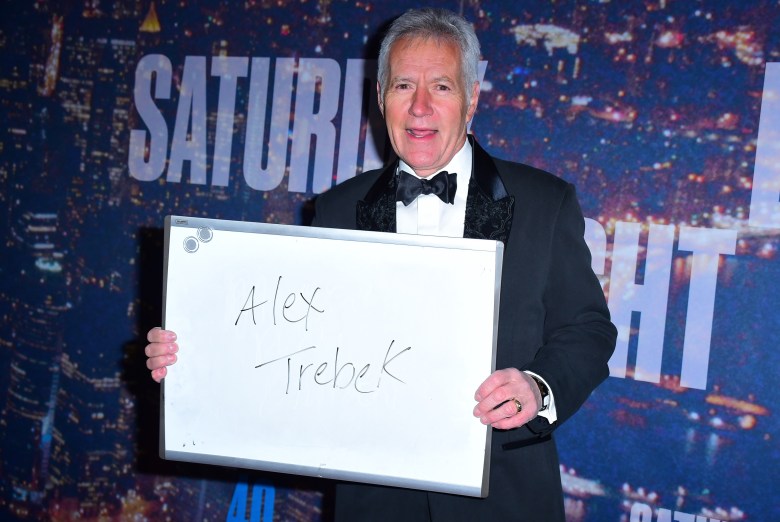 It wasn’t until 1984 that Trebek helmed a pilot for a revival of “Jeopardy.” The trivia show first aired in 1964 and ran until 1975, before transitioning from a day show to a night one. The original host was Art Fleming. The revival was well-received and Trebek has been hosting ever since.

But Trebek still didn’t slow down. In 1987 he took the reins as the daytime host of “Classic Concentration” for NBC; he’d host that and “Jeopardy” simultaneously till 1991 when “Classic Concentration” ended its run. By that point Trebek made history as the first person to host three American game shows at the same time (the third being a revival of “To Tell the Truth,” which ended in 1991.)

He’d continue to host other series while working on “Jeopardy,” including the “Pillsbury Bake-Off” till 1998. He’d also fill in on “Good Morning America” for a week in 1995. He’s made guest appearances on the likes of “The X-Files,” “How I Met Your Mother” and “Hot in Cleveland.” In 2014 he made the Guinness Book of World Records for the hosting the most number of game show episodes (6,829 episodes at the time). He also ran with the Olympic torch in 1996 and became a naturalized citizen of the U.S. in 1998. He has been the recipient of six Daytime Emmy Awards for Outstanding Game Show Host and has a star on the Hollywood Walk of Fame.

When interviewed in 2019 by CTV’s Lisa LaFlamme about his cancer diagnosis Trebek said, “I’ve lived a good life, a full life, and I’m nearing the end of that life … if it happens, why should I be afraid [of] that?”

He is survived by his wife of 30 years, Jean Currivan, and his two children, Matthew and Emily.