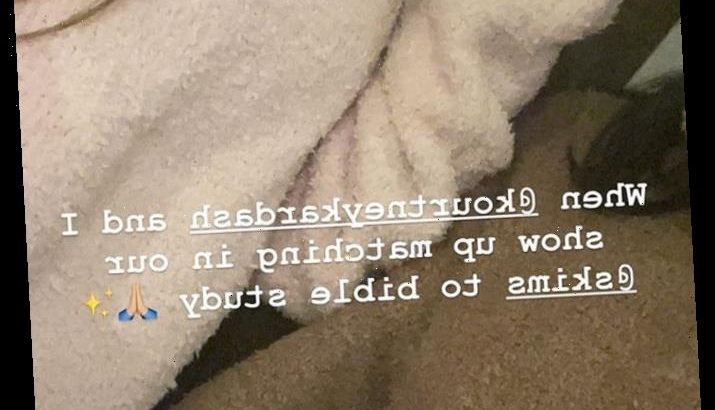 The Keeping Up with the Kardashians star, 40, shared a series of updates on her Instagram Story, including a photo of her in matching outfits with Kourtney, 41, as the pair attended a "bible study."

"When @Kourtneykardashand I show up matching in our @skims to bible study," she captioned the slide.

Earlier posts on her Story included photos of her double daily workouts, joined by sister Khloé, 36, for the second one. On Wednesday, a source told PEOPLE that the star is feeling "grateful" to have her sisters to support her, with an "inevitable" split from West, 43, looming following their tumultuous year. (Reps for the stars have not responded to PEOPLE's requests for comment.)

"December was a rough month for Kim. She has been living separately from Kanye. Over the holidays, it was hard for her to stay positive," the source said. "She has been trying her best, though, for the kids. She stayed in Los Angeles for New Year's [Eve]. Kourtney and Khloé were around to support her."

Kim and West wed in 2014 and share daughters North, 7, and Chicago, 2, and sons Saint, 5, and Psalm, who turns 2 in May. According to the source, Kim "has been thinking about divorce for months," but has held off for the kids.

"She is sad about it, of course," the source said. "She just feels she has done everything in her power to make her marriage work."

The day prior, multiple sources told PEOPLE that Kim was preparing to file for divorce. "He knows that she's done. She has had enough, and she told him that she wants some space to figure out her future," one source said of West.

A second source said that the divorce filing "will happen eventually, but she's waffling," while a third noted that the two are "in counseling and exploring their options."

"They have been working on their marriage for a long time, but no decision has been made," the insider said.