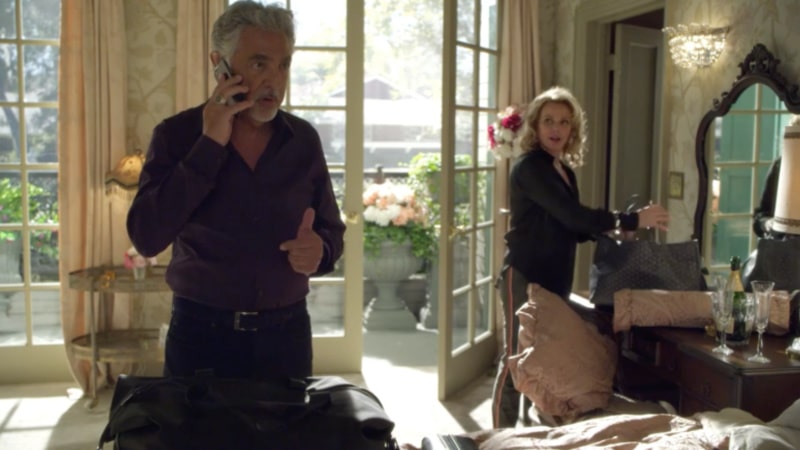 Gail O’Grady is back on Criminal Minds as her role of Krystall Richards, the third ex-wife of David Rossi. Their relationship has been featured on Criminal Minds before, as she invited him over for her daughter’s wedding in the season 13 episode, The Dance of Love.

But it sounds like Krystall and Rossi may not be ready to give up their relationship just yet. After last night’s episode of Criminal Minds, it sounds like these two may be back together, having a secret romance. During a scene that played out on the show last night, he asks her to be quiet during a phone call.

“What I don’t want is the whole team weighing in, just yet. They tend to have a proprietary interest in my love life,” he explains.

When she takes a phone call from her daughter, she doesn’t mention Rossi, to which he jokes about her keeping him a secret. Based on the reactions from last night’s episode, it sounds like viewers would love to see more of Rossi’s ex-wife, as she brings something new to the show.

Rossi and Krystall have a past together, but during a trip to Savannah, they realized that they would need to keep a low profile because Rossi didn’t want his team to get involved in his personal life. While the show or the characters never actually confirmed that anything happened, viewers are guessing that they are slowly starting to rekindle the flame again.

Criminal Minds producers have not confirmed whether she will be a new fixture on the show or if she will just make a few guest appearances here and there. However, based on viewer reactions, it sounds like she’s here to stay.

While Gail O’Grady’s character is divorced, it sounds like she has experience with that in real life. According to IMDB, O’Grady has been married and divorced six times with the last one ending in 2008. The site doesn’t list her as married at the present time.

The website also reveals that she has one son, Michael Colton O’Grady. She gave birth to him at the age of 41. The father was a boyfriend at the time, Chris Bayers. She named her son after her older brother, Michael Patrick O’Grady, who died unexpectedly in 2004, at age 42.

If viewers recognize Gail O’Grady, it’s possibly because of her work on NYPD Blue. She had roles in American Dreams, Revenge, Hellcats, Desperate Housewives, Boston Legal, Deuce Bigalow: Male Gigolo and She’s Having A Baby – to name a few. She has a long resume, including many works for Lifetime.

Criminal Minds airs on Wednesdays at 10/9c on CBS.