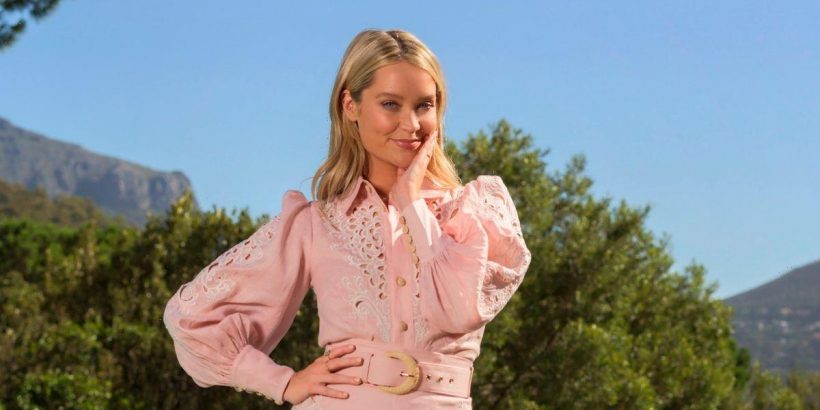 Mother of one Laura, who welcomed her first child with partner Iain Stirling not too long ago, was back to work offering Barking a sprinkle of Love Island magic.

Local residents saw the presenter driving a red Jeep into the town centre, which was decorated with flashing lights and a megaphone.

The creative team who were behind the production also planted an inflatable flamingo and luxurious plants alongside a red telephone box. This was also accompanied by several iconic suitcases that were handed out to what looked to be contestants.

Laura was wearing a red catsuit throughout the promotional clip. She then strutted over to the telephone box and swung a hammer at it which caused it to smash open.

As expected, crowds began to gather around the filming scene and started to film some of the antics on their phones themselves.

Some shots were then posted on social media platforms such as TikTok.

Celebrity Juice judge Laura recently teased her fans on Instagram by hinting she had a big shoot day ahead.

Posing in the doorway of a huge trailer, Laura wrote: "Shoot day! This is Big."

Intuitive fans were intrigued to find out what the presenter was getting up to and probed her in the comment section.

While another exclaimed: "Please be for Love Island!!!"

After taking a one-year hiatus due to coronavirus, the dating show is expected to make an explosive return onto TV screens in late June.

Kevin Lygo, Managing director of Media and Entertainment at ITV said in March: "There’s so much to look forward to on ITV this spring and into summer, with the Euros and the return of Love Island, but much more besides."

Despite no further details being revealed at the moment, many believe this series may be a bit longer than previous series with more contestants entering the villa.

In 2020, Love Island programme bosses said: "It was unfortunate we couldn't bring you Love Island this summer, but Love Island Australia performed very well for us, reaching over a million viewers for the final.

"With a huge appetite for the show, we've made three Love Island specials where we catch up with some of the best known former islanders from the past six years.

"We're also already planning a bumper series of Love Island for next summer."