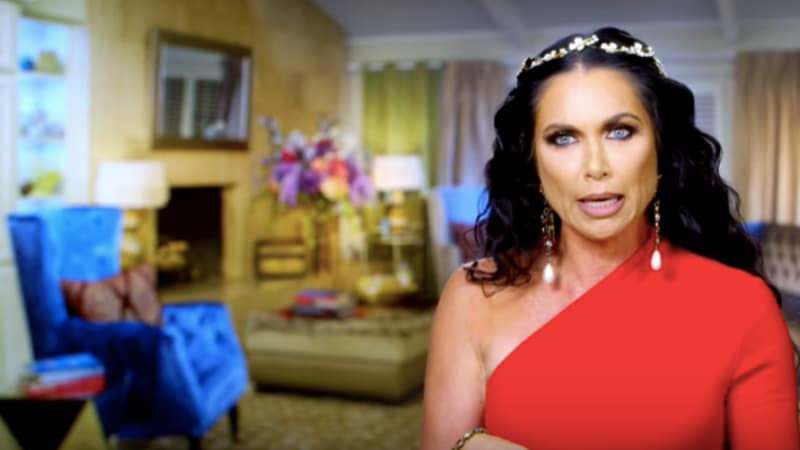 LeeAnne Locken wasn’t happy to learn that her friend, D’Andra Simmons had a few things to say about her relationship. LeeAnne, who accepted a proposal from her long-time boyfriend Rich Emberlin during the previous season of The Real Housewives of Dallas, had probably expected her friend to stand by her and be supportive.

However, when Locken revealed that she and Rich hadn’t set a date, D’Andra kept pushing for an answer as to why. The two had been dating for nine years, got engaged, and have been engaged for two years now.

While LeeAnne never really questioned Rich why they hadn’t set a date, D’Andra kept pushing for an answer. It seemed like she wanted something to be wrong. Now, she’s claiming that she’s heard rumors that he is cheating on Locken.

“Everybody’s concerned, including me. You are not telling me anything. We talked for three hours last week and I got nothing. I’m concerned for you,” Simmons told Locken during a party that aired during Wednesday’s episode.

“You guys do things separately and I was concerned because you’re not getting f—ing married. I can’t get a straight answer out of you about anything. I call total bulls— about this, LeeAnne,” she continued.

But LeeAnne Locken was shocked that her friend would question her relationship.

“Don’t be [concerned] because I’m going to tell you something: If I hear one more time that we lead separate lives, I’m going to go into a rage of fury that the f—ing meditation bowl cannot get me out of. I live with my fiancé and I’m happy,” she told Simmons. “Call bulls— all you want, D’Andrea. I’m not doing this with you. I’m not doing this.”

LeeAnne Locken revealed in a confessional interview that she thought D’Andra’s comments were offensive.

“Separate lives is offensive to me because it’s like he’s cheating on me,” she said. “It’s like he has another family in Chile.”

And it sounds like viewers agreed with LeeAnne, calling out D’Andra for her baseless accusations.

So, is there proof that Rich is cheating? He has been married before and he already has a platform thanks to The Real Housewives of Dallas.

No woman has come forward with allegations against Rich or has sold a story to a website or print publication. On the other hand, Rich himself hasn’t addressed the cheating allegations. Perhaps he will say something on the upcoming reunion special.

But one Twitter user pointed to something interesting. It’s possible that D’Andra Simmons is just saying these hurtful allegations because she’s upset with LeeAnne Locken for saying that she was broke and only had $200 in her bank account.

Where LeeAnne called out D’Andra’s finances, Simmons is going after Locken’s relationship. The person also questioned how D’Andra would feel if her marriage to Jeremy was riddled with cheating accusations.

On the next episode, LeeAnne Locken will talk to D’Andra about her drinking, questioning why she always has to include alcohol when she’s hanging out with her friends. This will surely anger D’Andra even more, resulting in her saying even more hurtful things to Locken. One has to wonder how much more this friendship can take.

The Real Housewives of Dallas airs on Wednesday nights at 9/8c on Bravo.