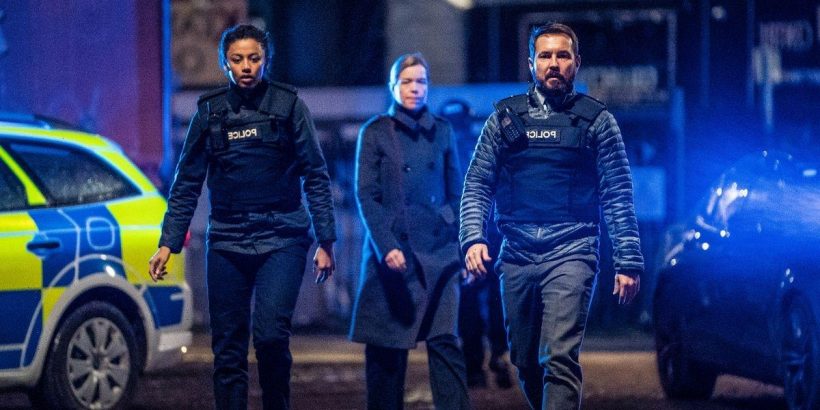 BBC have released not one but two teaser images from Sunday's upcoming episode of Line of Duty after DI Kate Fleming's (Vicky McClure) shooting horror.

The latest edition of the BBC police drama ended with DI Fleming caught up in a shootout.

DI Arnott can be seen rushing and putting on blue gloves, striding next to Hastings with DC Bishop and Carmichael following just behind him.

In the second picture, Hastings is absent and the Arnott and Bishop are walking in front and Carmichael lurks behind.

Have they been called to save Kate and if so, will they be able to save her in time?

Fans were left on the edge of the seats on the weekend fearing that DI Fleming been killed after gunshots were heard just before the credits.

Fleming was lured to a lorry park by her boss Jo Davidson (Kelly Macdonald) and ended up in a stand-off with OCG member PC Ryan Pilkington (Gregory Piper).

As the pair screamed “drop the gun” at each other, the audience heard two shots – but it was unclear who had fired first or whether either had been hit.

Viewers have been agonising over the possibility one of the main trio of anti-corruption officers – Kate, Arnott and Supt Hastings – would die after creator Jed Mercurio stressed nobody was safe.

Actress Vicky, 37, who has appeared in the show since the first series, recently teased her fate on the show.

Speaking on a podcast with former co-star Craig Parkinson, who played corrupt officer Dot Cottan, she said: "Well every episode is terrifying and Jed is always there to serve the story – it is exactly what happened with Dot.

"Dot’s time came when it was right to serve the story and that is what Jed will always do.

"I don’t want to put everything out there but Jed serves the story."

However, eagle-eyed fans have spotted a yet-to-be-aired interrogation scene which suggests that Kate survives for at least one more episode.

The scene in question shows Vicky dressed in a blue long-sleeved top which she shared on social media in September by Mercurio himself.

So far Kate has not been involved in any such scene alongside Hastings as she has transferred to the Murder Investigation Unit.

One fan said: "She will live! We haven’t seen this scene yet."

Prior to series six starting, the actress herself hinted her time as part of the three AC-12 musketeers could be coming to an end.

She said: “You know, nothing lasts forever. It will be a really sad time, it’s the longest standing job that I’ve ever had.

"As corny as it sounds, you know there is nothing nicer than working with mates… That’s really ­important. So, it will be a bloody great shame. I’ll keep going until I’m told to not."

Viewers must now wait until next Sunday’s penultimate episode of drama to discover whether Kate has survived.

Line of Duty continues Sunday on BBC One at 9pm