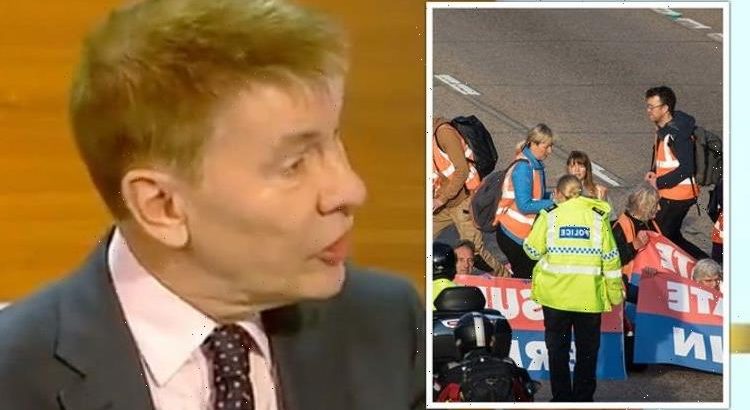 M25 protesters should be 'locked up' says Andrew Pierce

Andrew Pierce fiercely slammed Insulate Britain protesters for repeatedly blocking the M25, saying that they should be “locked up”. The slamming came after an injunction was granted against M25 protesters. The protest group has been calling for the installation of heat-saving measures in social housing by 2025, and all homes by 2030.

Speaking to Jeremy Vine on Five, Andrew Pierce went on a rant: “The judges are hopeless in this country, frankly, they’re always on the wrong side in my view.

“These people are stupid, selfish, and reckless.

“They’re running in front of traffic.

“I don’t care if they risk their own lives but they’re risking the lives of motorists, which isn’t fair.”

He went on: “They’re diverting police to jobs that they shouldn’t have to be doing.

“And here’s the thing, on my LBC show a couple of days ago, a guy called in, who was trapped on the M25 for six hours.

“His mum had a stroke in the car. He was trying to drive to a hospital for six hours.

“This doctor told him if he’d made the drive in the 19 minutes the journey should have taken his mum, she would have had minimal conditions.

“She’s paralyzed on her entire left side.

“That’s on their conscience, and they don’t have a conscience.”

“They say ‘Oh, our hearts are breaking for him, for that woman. Really?

“That’s a consolation, isn’t it?

“They are reckless and stupid so we’ve got to lock them up because that stops them from going back onto the motorway.”

Insulate Britain has blocked parts of the M25 five times in the last fortnight.

A court ruling won by the government warns climate change protesters that they could be jailed if they continue their campaign of blocking the M25.