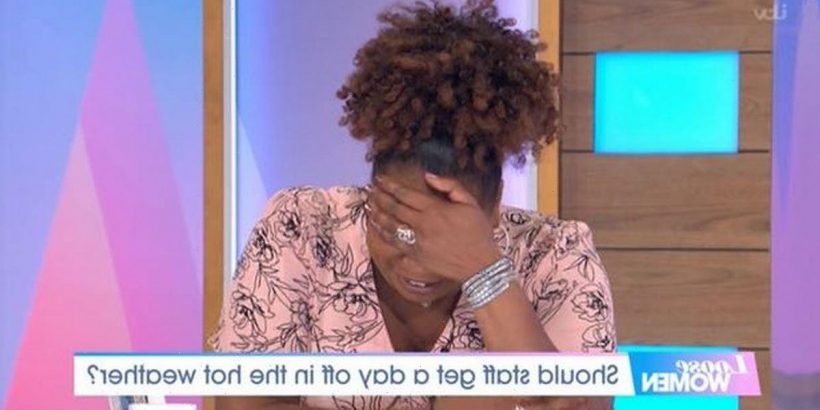 The on-air blunder came during a discussion about the heatwave that has swept Britain and whether staff should be granted a day off when it’s this hot.

As the ITV show’s anchor Kaye Adams asked Linda her opinion on the topic, the 63-year-old answered: “No, I don't think we should have a day off.”

She continued to explain her viewpoint, saying: "I mean, I love the sun. When I got up this morning and the sun was shining I thought, oh I can't be a**ed to go into work today.”

However, Linda immediately realised what she had said and tried to cover up her mistake, adding: "I mean, I can't be bothered to go into work today.”

Fortunately for Linda, Kaye hadn’t heard her slip-up, but their other co-star Brenda Edwards noticed straight away as she looked shocked and started to giggle.

As Linda quickly tried to move the conversation on, Brenda put her head in her hands as she continued to laugh.

This comes after Linda made a similar slip-up during a discussion when she got carried away telling her co-stars a story about her daughter.

During a recent discussion about ‘modesty shorts’ Linda, 63, said: “Can I just say, my 30-year-old daughter needs some of those shorts.”

“I was away with her for the weekend in Clacton and me and the other nanny, nanny Brenda, couldn’t believe how many times she bent over to pick up something, or to do one of the kids shoe laces up and there was a total eclipse.”

Linda was so engrossed in her anecdote that she then said: “The cheeks of her a**e… bottom you could see.”

After correcting herself and putting her head in her hands in embarrassment as Charlene scolded her for using a “naughty word”, Linda added: “I apologise everybody… Oh no!”

On the same show, Emmerdale actress Nicola Wheeler, who plays Nicola King in the ITV soap, appeared via video link to talk about her big storyline and made a similar gaffe.

Speaking about playing a character with exactly the same name as her, the 47-year-old actress explained that she often gets confused whether people are referring to her or her on-screen persona.

Nicola then made her slip-add as she quipped: “If they say the word b***h then it’s me… no I’m joking!”