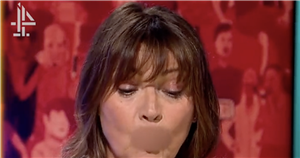 Joe Lycett's Got Your Back is known for being the consumer show with an edge – especially after Joe pulled a huge publicity stunt on Steph's packed lunch – and tonight's episode (2 September 2021) is no different.

Joe intends to take on the illegal puppy trade which boomed during lockdown as our 100% at-home lifestyles left us yearning for furry companions. Assisting him in his hunt is morning talkshow host and dog-lover Lorraine Kelly.

Both Joe and Channel 4 shared a teaser of the upcoming episode which showed Lorraine reading out a disgruntled – to say the least! – response from an illegal puppy trader. In the clip, Lorraine casually reads out the strongly worded complaint where the trader's expletives were dubbed by dog barks.

Channel 4 tweeted the clip alongside the caption: "This is an *actual* response from an illegal puppy trader who @joelycett and @reallorraine expose TONIGHT on #GotYourBack. Safe to say he didn't take it well."

Joe then retweeted the clip, adding: "Looks like we pissed off some illegal puppy traders. Whoopsie!"

The 33 year old comedian took to his Instagram to say: "Legally we are obliged to give those we investigate on Got Your Back a right to reply. Tonight @lorrainekellysmith delivers my all time favourite."

Joes followers on both platforms flocked to support him and Lorraine, saying that he's "doing the public a service" with his work on the show.

Keep up with all the latest news on Lorraine by signing up to OK!’s daily newsletter.

Another added that they'd tune in "just to hear Lorraine swearing." While someone else joked that "bad news doesn't seem so bad coming from Lorraine. She should have been a bailiff."

Many fans commended Joe and Lorraine for taking on a problem close to their hearts.

One wrote: "Personally do away with all breeders, legal or otherwise until no dogs are available for rescue.

To watch Joe Lycett dress up as Cruella de Vil and take on an illegal puppy trader, tune into Joe Lycett's Got Your Back 2 September at 8pm on Channel 4.