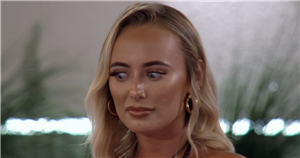 Laura Whitmore continued the recoupling ceremony during the latest edition of the ITV2 dating show.

Viewers previously watched Hugo Hammond and Chloe Burrow's friendship couple come to an end, with both stars coupling up with newcomers – Amy Day and Dale Mehment- to continue their journey on the show.

However, there was also a shock as Toby Aromolaran returned from Casa Amor with new girl Mary Bedford on his arm, leaving his partner Abigail Rawlings devastated as she'd remained single.

Jake Cornish returned to girlfriend Liberty Poole while Teddy Soares came back to the villa alone with the intention of coupling up Faye Winter, Faye had coupled up with new boy Sam Jackson.

Welshman Liam was the final boy to return to the main villa, leaving fans wondering if he was alone or brought back Lillie Haynes.

Host Laura asked Millie: "Do you think he's stayed loyal to you when he's at Casa Amor?"

Millie shrugged her shoulders and looked as though she might cry, while the boys sitting down looked noticeably awkward.

Liam decided to walk back into the villa alone to reunite with Millie.

However, Lillie and the other girls who failed to couple up with any of the boys in Casa Amor were invited into the villa to meet the rest of the islanders before heading home.

When asked by Laura how the left, Lillie said she was "shocked" before going on to tell the group about connection with Liam in the other villa.

She explained that they'd been kissing outside challenges, leaving Millie heartbroken.

Taking to Twitter, one fan penned: "Is Liam putting this all on Lillie? Is that what’s happening right now? I swear let me in that villa."

Another added: "The producers were good for bringing Lillie back."

A third person posted: "Liam is a liar. Millie should have got the story from the girl."

Before heading to Casa Amor, Liam's relationship with Millie was going from strength to strength.

While Maisie remained loyal in the main villa, Liam enjoyed getting to know Lillie and even shared multiple kisses with the South Shields lass.

Liam and Lillie shared a bed during their stay in Casa Amor while Millie slept outside on the daybed.

What makes Liam's betrayal all the more hard for angry viewers to stomach is that the postcard sent from Casa Amor to the main villa didn't even scratch the surface when revealing what Liam had been up to.

There wasn't a photo of him kissing Lillie on Monday or his three way Truth or Dare kiss, leaving Millie relieved as she comforted both Faye Winter and Kaz Kamwi who were left angry by what they saw of Teddy Soares and Tyler Cruickshank.

On seeing a preview of Liam kissing Lillie, one angry fan tweeted: "Am genuinely raging about this, and Millie is sitting there thinking that Liam isn't as bad as others because of his photo, when he's been making moves on Lillie and TEDDY HAS BEEN SLEEPING ON THE DAY BED"

A second fumed: "i just threw my laptop and almost broke it after watching Liam kiss Lillie. Men are trash and love doesn’t exist goodnight."

Love Island airs nightly on ITV2 and ITVHub at 9pm