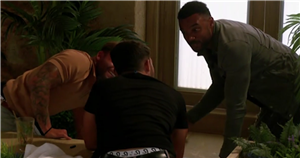 The Islander enlisted the help of his friends Jake Cornish and Liam Reardon to design a sweet and romantic proposal to Kaz Kamwi, asking her to be exclusive with him.

But as the trio rushed through their plan on the terrace, the excitement got the better of them.

Attempting to write the words on tea towels in a similar vein to the iconic scene between Keira Knightley and Andrew Lincoln in hit film Love Actually, 26 year old Tyler got stuck on the word exclusive.

“No it’s ‘ex – clu – sive’,” Liam tried to advise, repeating the letters E and X repeatedly to try and separate the sounds.

Jake, who is seen having another row with Liberty Poole in the next instalment, couldn’t stop snickering and Croydon-born Tyler worked himself up into a tizzy trying to make sure he wrote the word correctly.

“Man, I usually have nerves of steel,” the islander was then seen explaining in the Beach Hut. “But I’ve never sweated so much over… over a girl like this before!

Luckily, Tyler manager to contain himself eventually and the grand reveal went as well as it could have, leaving blogger Kaz, 26, over the moon.

Find out more about the latest gossip from Love Island and more royals with the OK! newsletter in your inbox every day.

But fans couldn’t get past the fact that Tyler has graduated a university course as hard as law and wasn’t able to spell a simple word.

Taking to Twitter, one person asked: “Tyler, the lawyer, doesn’t know how to spell ‘exclusive’?? #LoveIsland.”

“Tyler, Jake and Liam arguing over how to spell exclusive #LoveIsland,” another viewer giggled.

While a fourth wondered: “tyler is a lawyer that can’t spell exclusivity?? #LoveIsland.”

Others were simply thrilled that despite Tyler’s rocky efforts, his proposal to Kaz went down without a hitch, and the pair laughed and hugged.

Kaz shouted out her happy news and the couple went down and rejoined their friends for celebrations, before a night in the Hideaway.