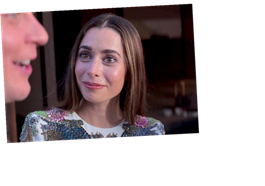 You know how they say married couples sometimes share the same brain? Yeah, well, HBO Max’s new series Made for Love is taking that idea literally.

The streamer has announced a premiere date for the sci-fi comedy — it debuts Thursday, April 1 with the first three episodes — and also released a new full-length trailer, which let us in on the Black Mirror-esque central conceit. Cristin Milioti (who’s a Black Mirror alum herself, having starred in “USS Callister”) plays Hazel, the wife of tech billionaire Byron (Tell Me a Story‘s Billy Magnussen), who enjoys swimming with dolphins… every morning in his own swimming pool. Their marriage seems happy, which leads Byron to introduce a new chip that married couples can implant in their brains to share their thoughts, using himself and Hazel as guinea pigs: “Technology has improved the way we live. Why not improve the way we love?”

Hazel’s not so happy, though: Byron implanted the chip in her brain without asking her first, and she wants it out, along with a divorce. She goes on the lam, with Dan Bakkedahl as a henchman of Byron’s tracking her every move and Ray Romano as Hazel’s widowed dad Herbert, who lives with a synthetic girl named Diane. “I don’t know what I want,” she admits to Byron, “but I know I don’t want you.”

Press PLAY below for a sneak peek at Made for Love, and then hit the comments and share your first impressions.