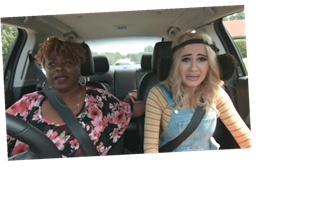 “Borat 2” served as a launching pad for Bulgarian actress Maria Bakalova, who now finds herself in the running for an Oscar nomination thanks to her fearless turn as Borat’s daughter Tutar. While Bakalova’s encounter with Rudy Giuliani broke the internet, it was Tutar’s relationship with babysitter Jeanise Jones that became the unexpected sensation of the “Borat” sequel. Jones was an unknowing participant in “Borat 2” during production, and her messages of empowerment to Tutar made her a breakout favorite. Bakalova told the Los Angeles Times she finally met Jones out of character over the holidays.

“Jeanise is a true angel. I will probably always think of her as my godmother, a real hero and life coach,” Bakalova said. “She just wanted to help this girl become a strong woman. We had a real human connection from the very first day we met. I called her on Thanksgiving: It was my first American Thanksgiving and was also my best. I was so happy to talk to her that I started to cry. When we were shooting, it was very hard for me, because I wanted to tell her not to worry about me. She is a really good example of how important it is to be a good person and care about others.”

Speaking to IndieWire in early November, Bakalova said she had yet to speak to Jones as herself but was looking forward to the day a reunion could happen. The actress added, “I’m waiting for the right moment [to meet her]. All day long, I was saying crazy things to her that were super-offensive, but she was still there for me. I want to talk to her and I want to hug her. She just wanted to help a young girl be a strong woman.”

Bakalova has been singing the praises of Jones for her entire “Borat 2” press tour, telling The New York Times shortly after the film’s release, “We spent maybe five, six hours with Jeanise and she is the person you see onscreen,” Bakalova said. “She is just incredible. She’s not an actress — she just wanted to help Tutar and for Tutar to appreciate herself, to follow her dreams and educate herself. We need people like Jeanise. She is an angel.”

Jones’ heartfelt appearance in “Borat 2” inspired a fall crowdfunding campaign that raised over $100,000 for her. “Borat” leading man Sacha Baron Cohen donated an additional $100,000 to Jones, who decided to use the money to support her community in Oklahoma after a series of ice storms and other natural disasters led to power outages and other issues.

“I think this has been the hardest year in living memory for most people,” Baron Cohen said during a SAG conversation last month. “Jeanise is this incredible figure in the movie. She helps Tutar find her own beauty and helps her stand up for herself and value her independence as a woman. I heard they were doing a crowdfunding for her afterwards. I called her up and I wanted to help in some way. I said, ‘What’s important to you? Is there some way I can help?’”

Baron Cohen continued, “At the time there was a natural disaster in Oklahoma and they were struggling to house and feed a lot of members of her community. It was the least I could do really. By the way, her pastor was saying this woman Jeanise had spent all her time helping others in the community. He virtually took us around the church and they were housing and feeding a lot of people who were struggling. What else can you do?”