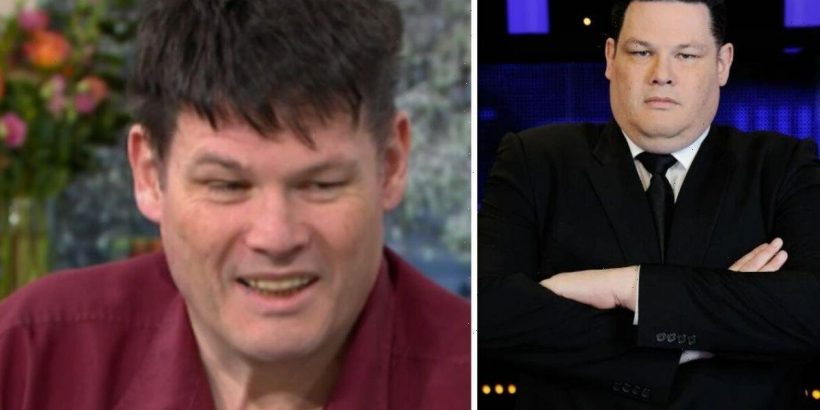 The Chase: Mark Labbett reflects on being a maths teacher

The Chase star Mark Labbett joined This Morning presenters Alison Hammond and Dermot O’Leary on Monday morning to discuss The Chase’s recent win at the NTAs. He also gave an insight into what it’s like to work on the show, as well as the best tips to beat the contestants they are faced with. However, viewers were left distracted by his incredible weight loss and took to their social media to comment on the star’s appearance.

Mark recently addressed his staggering weight loss on Loose Women and explained: “I am gradually dropping Xs off my size.

“I’ve gone from 5XL to 4XL and it looks like the next time I go shopping I’ll be able to squeeze into XL underpants.” (sic)

He explained that his health was at risk when he was his heaviest, and admitted: “I’ve lost 10 stone. I was 29 stone when I was a full-time teacher in 2003, and I was in danger of high blood pressure.

“I’ve been around 26 stone up until lockdown, and then a few things happened quite nicely and came together, and I started losing weight.”

Mark owed his weightloss over the years to regular dog walking and running around after his young son.

The ITV star has been on screens since the game show first began in 2009 and has always been the contestant’s favourite chaser to take on.

His vast knowledge of subjects means that it is very rare for contestants to make it past Mark, let alone winning in the Final Chase.

Feeling proud of his knowledge, Mark recently explained that he is “pretty much” an expert in all topics and has one that he deliberately keeps as his “kryptonite”.

He explained to Express.co.uk: “I cover pretty much everything, and you work on your weaknesses, a bit like any professional sportsperson.

“Food and drink, I love eating it, but I’m not very good at cooking it, so I had to do a lot of work on that one and learn my terms.”

“In America, they are not so keen on a curry house but there are an awful lot of questions on Vietnamese cuisine, Korean cuisine, Hawaiian cuisine, Mexican obviously – LA is virtually the second home of Mexican cuisine and it’s lovely – so you’ve got to put the effort in.

“Having said that, I deliberately keep one area weak, and that’s soap operas because, as I modestly put it, Superman needs kryptonite.”

This Morning airs weekdays from 10am on ITV.