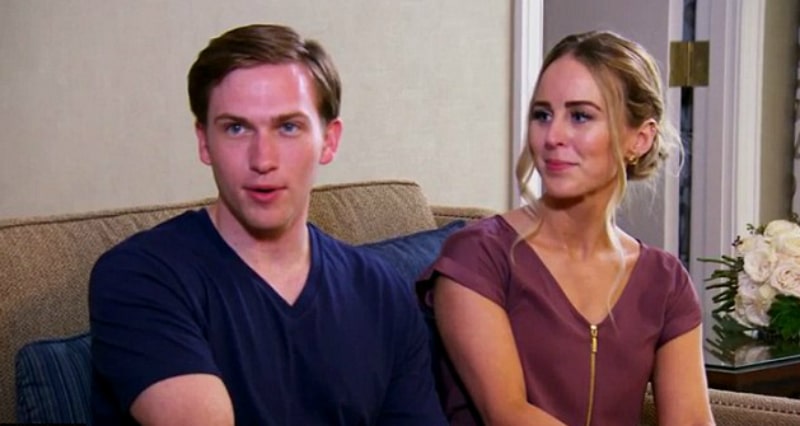 It’s been a rough eight weeks on Season 7 of Married at First Sight but Decision Day is here and now, all three couples will have to decide if they will stick together or if they are getting divorced.

The fate of one couple is pretty easy to figure out as their split is already public record. Weeks before the MAFS season finale, Monsters & Critics was first to report that Mia Bally filed for divorce from Tristan Thompson.

Mia and Tristan’s relationship was doomed from the start. When they weren’t able to go on their honeymoon after Mia was arrested at the airport while trying to go through customs, it was the beginning of the end.

From there, Mia and Tristan sparred about anything and everything and it was clear that the two were as compatible as oil and water.

Moving on to Amber and Dave. This couple seems like they could have some potential if Amber would do something about her overwhelming insecurity.

Even Dave has said on more than one occasion that Amber’s constant questioning of his interest and affection has been (not in his exact words) a total turn off. Despite that, the two have still continued on in the marriage and really tried to work it out but is there enough between them to make things work?

The third couple and the one who really has the best chance of succeeding would be Danielle and Bobby. The two seemed to click right away and have always denied having any trouble getting along.

In the Married at First Sight Season 7 finale, Danielle even said that she can’t imagine life without Bobby. The biggest problem with Danielle and Bobby is that she still hasn’t said those three little words. Bobby, on the other hand, has professed his undying love for his bride, something that Danielle has met with more questions.

As the couples headed into Decision Day eve without each other, each of the three couples really made it seem like they were thinking hard about whether they wanted to stay together or divorce. Is that really true? Or did they possibly already know which way the day would go?

All three couples tried to play it cool and make viewers question whether they may decide to stay together or split. Even Tristan and Mia played it up even though we already know.

Amber and Dave went back and forth about wanting to make sure they were in it for the right reasons and that they wanted to be with each other. What was a little surprising was Amber’s admission that she missed her old apartment and that she liked sleeping in her old bed.

Dave missed her though and more specifically, he missed the sex. Dave was quick to point out that their night apart before Decision Day was the first time they didn’t have sex in two months.

Even though Danielle and Bobby are possibly the most compatible couple in the history of Married at First Sight and have suffered the least amount of drama, Danielle still hasn’t said “I love you” yet. On Decision Day maybe?

That seems to be the biggest issue for Bobby, who admitted that he loved Danielle more than his mom! There’s no way he’d want a divorce after making that confession, right?

Danielle and Bobby are the first couple up to face the relationship experts. Dr. Pepper comments on how many couples experience highs and lows, for these two, there haven’t really been any lows.

When the spotlight was on Danielle to make her decision, she hesitated just long enough for Bobby to make a statement. When he did, he made it clear to Danielle that the last eight weeks were the best of his life before getting down on one knee and pulling out a new ring.

Then, Danielle turned to Bobby and admitted that she’s “head over heels in love” with him and admitted that he is the “best thing that ever happened” to her. That was all Bobby needed to hear and there wasn’t a dry eye in the room.

Tristan admitted that he was confused heading to Decision Day and said that he didn’t know what to do. One on hand, Tristan loves Mia and doesn’t want anything to happen to her. On the other, it’s been a crazy eight weeks.

When it came time to make the decision, Tristan shocked everyone when he said that he wanted to stay married to Mia. Now that we’re done picking up our collective jaws off the floor, let’s get to Mia’s decision, which was equally shocking.

In short, Mia also wanted to stay together. She even admitted that she was excited to move to Houston with Tristan and start their life together.

Next up is Amber and Dave, the wildcard on Season 7 of Married at First Sight. Well, at least we thought they were a wildcard but who thought Mia and Tristan would choose to stay together on Decision Day?!?

When it comes to Dave, he’s already said that the last thing he wants is a divorce. He also missed Amber when she slept at her own place on Decision Day eve.

After quite a bit of stalling, Amber wanted to stay married and put the ball squarely in Dave’s court. Dave agreed and said he wanted more time so they could work on their marriage, making this the most anti-climactic season finale of Married at First Sight.

They all stayed together on Decision Day but will they stay together?

Which MAFS couples are still together?

We’ll just make this short and sweet for Mia and Tristan. Mia Bally filed for divorce back in September and the two do not follow each other on social media anymore. It’s not clear what happened between Mia and Tristan but they are done.

The future of Amber and Dave is a little bit tricky as they’ve been much quieter about their life on social media and public record. Amber’s Instagram is private but on Twitter, she doesn’t follow Dave and it doesn’t appear that he follows her either. It’s worth noting that they both follow Mia so it’s not like they’re avoiding anyone from MAFS.

Considering their rollercoaster on Season 7 of Married at First Sight, it’s likely that Amber and Dave called it quits but as for now, there’s no real proof.

As for Danielle and Bobby, they are the most likely couple to make it to their 50th wedding anniversary. Unfortunately, Danielle informed the world that Bobby left social media back in September due to the nasty comments that were being made about them and the show.

Much like Amber and Dave, there’s not a lot of evidence either way regarding Danielle and Bobby’s relationship. Danielle has a Twitter account but she doesn’t use it.  However, based on Bobby’s proposal and Danielle’s admission after so long that she is in love with him, our bets are on these two staying together…possibly forever.