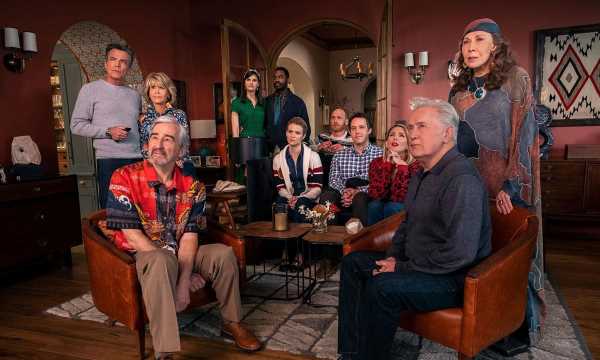 After what feels like forever, the final episodes Grace and Frankie have finally landed on Netflix for viewers to enjoy. The popular comedy, starring Jane Fonda and Lily Tomlin, follows Grace, a retired cosmetics mogul, and Frankie, a hippie art teacher, whose lives are turned upside down when their husbands Robert and Sol announce that they are in love with each other.

MORE: See what the cast of Grace and Frankie looked like at the start of their careers

But what about their families in real life? We did some investigating, and here’s all you need to know about the stars of the show and their children…

WATCH: Are you a fan of the Netflix show?

Jane Fonda is the only daughter of socialite Frances Ford Seymour and old Hollywood star Henry Fonda. The actress, 84, welcomed her first child, a daughter named Vanessa Vadim, with her first husband, Roger Vadim, in September 1968.

The two split in 1973, and the same year, Jane her second husband, Tom Hayden. Together, the couple had two kids – a son, Troy Garity, who became a well-known Hollywood actor and a daughter, Mary Luana Williams, who followed in her dad’s footsteps and became a social activist.

MORE: 5 shows to watch if you love Grace and Frankie

In 1990, Jane and Tom divorced, and a year later she found love again with media mogul Ted Turner. However, that marriage didn’t last long either. The former couple called it quits in 2001. Following her third divorce, Jane reportedly decided to spend more time with her children and has dated on-and-off since.

Lily Tomlin has been with writer and producer Jane Wagner since the early seventies, but they didn’t tie the knot until 2013.

MORE: Why is Grace and Frankie ending after season seven?

The two married in a low-key private ceremony held at a friends house on New Years Eve. While the couple once did consider having children, they ultimately chose not to.

Speaking about their decision not to become mothers, Lily told The Guardian in 2015: “Sometimes I think it would be nice to have somebody who looks like a replica of you in some fashion. But I don’t think it ever was an aspiration of mine.”

“In retrospect, we say every day, ‘I’m so glad we didn’t have any children.’ When I think of the world now, I don’t want to even deal with having to raise a child.”

Martin Sheen, who plays Grace's ex-husband, has perhaps the most famous family out of all the cast! He is the father of Two and a Half Men actor Charlie Sheen, who has made headlines in recent years due to his battle with substance abuse and marital problems. Martin and his wife Janet Templeton are also parents to sons Emilio and Ramón and daughter Renée.

Charlie himself has been married three times and has five children and one grandchild, making Martin and grandfather and a great-grandfather!

Sol, Frankie's former spouse in the series, is played by actor Sam Waterson who has been married twice and has four children. With his first wife, Barbara Rutledge-Johns, he has one son named James, who followed in his father's footsteps and is also an actor.

MORE: Grace and Frankie season seven part two: everything we know so far

Just one year after divorcing Barbara, Sam got married again, this time to former model Lynn Louisa Woodruff. They have three children, daughters Katherine and Elisabeth, who are also actresses, and a son, Graham.

Grace's second husband Nick is played by Peter Gallagher, who is known to audiences for his dramatic roles, including Sandy Cohen in The OC and Deputy Chief William Dodds on Law & Order: Special Victims Unit.

MORE: The OC then vs now: See how the cast have changed over the years

He has been married to his wife Paula Harwood since 1983, but their love story goes back to their college days. According to Peter, he waited seven years before plucking up the courage to ask Paula out on a date!

Today they are parents to two children, both of whom have flown the nest. His son James is a film director and his daughter Kathryn is an actress and singer.

Grace and Robert's eldest daughter Brianna is played by comedian and actress June Diane Raphael. June is married to fellow comedy actor Paul Sheer and the couple have worked alongside each other on many sitcoms, including The League and Burning Love. They tied the knot in 2009 after six years of dating and are now the proud parents to two boys named August and Sam.

Brooklyn Decker plays Grace's daughter Mallory. The former swimsuit model is married to tennis pro Andy Roddick, with whom she shares a five-year-old son and a three-year-old daughter.

It’s believed that Bud actor Baron Vaughn is in a relationship with playwright Rhiannon Ciara Vaughn, with whom he shares a four-year-old son. He hasn’t shared a photo of the two of them on his social media channels in a few years, but it may be that he just wants to keep his personal life out of the spotlight!

Ethan Embry plays Coyote, the youngest adoptive child of Frankie and Sol. Ethan has been married three times and has a son, named Chad. He was married to Amelinda Smith for six years before going on to meet Hillbilly Elegy actress Sunny Mabrey.

The couple married in 2005 before divorcing in 2012. However, just a year later, they began dating again and remarried in 2015.