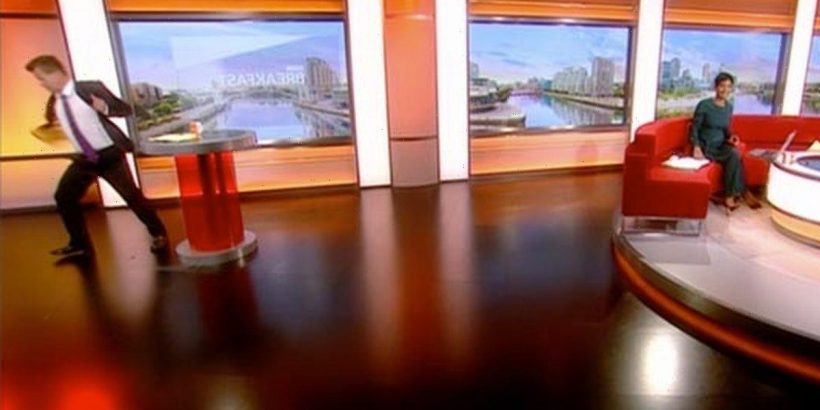 BBC Breakfast sports reporter Mike Bushell was forced to run out of the studio on today’s show (May 7) – leaving Naga Munchetty in hysterics.

Naga was joined by John Kay on the sofa this morning and were joined by Mike during the show to speak about last night’s Europa League results and the news that Ed Sheeran has become a sponsor of childhood club Ipswich Town.

But it appeared he was in a bit of a rush to get out of the studio when his report came to an end.

Speaking on Arsenal’s exit, Mike joked: “What Arsenal need now is a poster to give them an afterglow and make them happier.”

“I don’t even think that would help now…” Naga replied.

Before she could finish, Mike interrupted with: “I love this next item. I’ve got to go, I’d love to say.”

“You're heading outside and you’ve got your rowers,” Naga added, before Mike whipped off his jacket and ran out of the camera shot.

The surreal moment had the BBC Radio 5 Live presenter in stitches.

The former Strictly Come Dancing contestant was in fact rushing off to prepare for a segment outside.

Later in the show, he was seen on the quayside of Salford outside the BBC studio to hand Frank Rothwell and Jasmine Harrison their world records of being the oldest and youngest rowers to cross the Atlantic Ocean respectively.

It comes after fans were left baffled by Naga and usual co-host Charlie Stayt being replaced on BBC Breakfast for yesterday’s show (May 6).

One said: "Where is Naga and Charlie?"

A second wondered: " On BBC Breakfast with Sally Nugent and Ben Thompson are the regular presenters busy elsewhere?"

Of course, like everyone, Naga and Charlie take breaks and holidays from BBC Breakfast.

Elsewhere on yesterday’s show, Jade Thirlwall was accidentally replaced by a “new member” of Little Mix after a technical error.

And Carol Kirkwood was left mortified after the hosts noticed she appeared to forget one of their names for the second time.