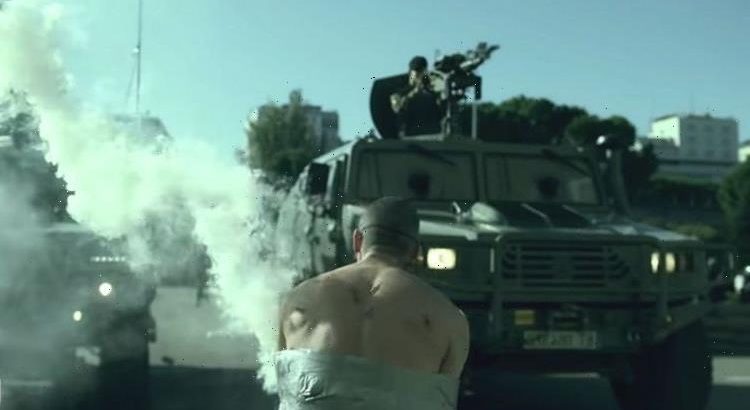 Money Heist fans have been patiently waiting for the release of season five of the Spanish crime drama after shocking scenes where Professor (played by Alvaro Morte) had been caught. A new trailer has been unveiled and the Netflix streamers have spotted a major clue that could see the survival of an enemy.

Taking to Reddit, the viewer posted: “A half-second glimpse showed that Gandía will leave the Bank of Spain with his hands tied.”

Cesar Gandia (José Manuel Poga) first appeared in the series as the Head of Security for the Bank of Spain.

When the heist occurred he was taken in as a hostage but was later able to escape with the help of Palermo (Rodrigo de la Serna).

As a violent character with assassin skills, Gandia joined the Spanish authorities to track down the robbers.

With the protection of police gear, Gandia returned to the bank in an attempt to capture the gang.

This led to him trying to strangle Helsinki (Darko Peric) and successfully kidnapping Tokyo (Úrsula Corberó) before murdering Nairobi (Alba Flores) in the shocking scenes.

Earlier in the episode, Nairobi had been looking out a window when she was struck in the head with a bullet.

The gang were able to remove the bullet and helped her through recovery. It was going well until Gandia tracked her down and held her at gunpoint.

In the jaw-dropping scene, Gandia shot her in the head before being captured by the gang and knocked out by Palermo.

The emotional trailer gave fans a sneak-peak of what they could expect in the upcoming season.

One clip shows the team still taking revenge out on a bloodied and bruised Gandia for killing Nairobi. This is shown as Tokyo gives him a huge blow to the chin with her knee.

After the murder, she stabbed him in the shoulder which made him unconscious and Denver (Jaime Lorente) also got revenge by throwing a grenade at Gandia.

Although the gang wanted to kill him, they were stopped by the Professor and instead re-captured him as a hostage.

They used him as leverage for the police as they had Lisbon in their custody.

Gandia made an attempt to escape by trying to attack Bogota (Hovik Keuchkerian) but instead, the tables were turned and Gandia was beaten to a pulp.

In the quick preview, it looked as though Gandia is set to make it out of the Bank of Spain alive.

The trailer showed the group being invaded by the Spanish military.

But, refusing to go out without a fight, the robbers planned for an epic and explosive war.

With the doors open, Gandia steps out and falls to his knees in front of the soldiers while tied up.

Although his back was faced to the camera it’s safe to assume that it was him, because no one else would have been tied up by the gang to take a brutal beating.