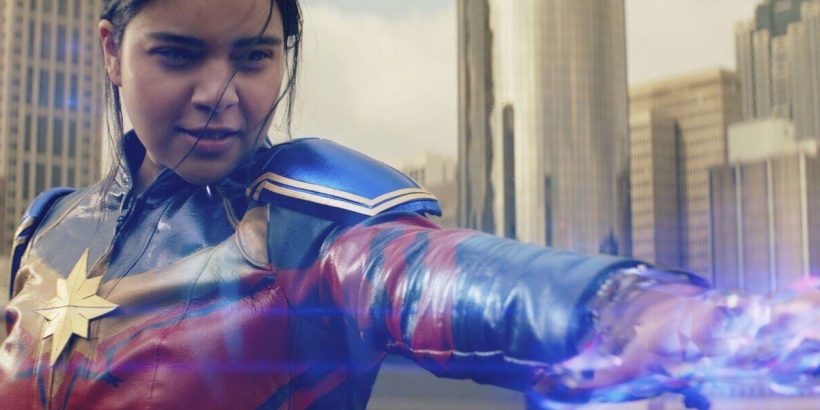 Disney Plus will be launching its new comic book series Ms Marvel. The show is going to be premiering on Wednesday, June 8 with the six-part series part of Phase Four of the MCU. The show follows a Muslim American teenager with a love for gaming and fan-fiction, who is struggling to find her place both at home and at high school – until she gets superpowers.

Who stars in Ms Marvel episode 1?

The 19-year-old actress, who grew up reading comics and watching superhero movies, described joining the Marvel franchise as a dream come true.

Ms Marvel marks Vellani’s debut and she will also be starring in The Marvels, which is in post-production and slated for release in 2023.

Speaking to NPR about landing the role, the rising star said: “Marvel is one of the most accessible franchises in the entire world, and film and TV totally shape how we see people in this world.

“I think it’s so wonderful to show a child of immigrant parents who’s proud of their culture and doesn’t neglect it.”

Taking on the role of Kamala’s best friend Bruno Carrelli is Matt Lintz, who has previously starred in The Alienist, The Walking Dead, and Pixels.

Portraying the knife-wielding vigilante Kareem / Red Dagger is actor Aramis Knight, who has featured in Into the Badlands, Borrasca, and movies Ender’s Game and Rendition.

In the role of Kamala’s older brother Saagar Shaikh is Aamir Khan with the star appearing in TV series Just Giggle It, Average Joe, Unfair & Ugly, among other roles.

Rish Shah plays the object of Kamala’s affections Kamran, after the British actor appeared in Emmerdale as Kirin Kotecha as well as BBC series Years and Years and the movies To All the Boys: Always and Forever and India Sweets and Spices.

Actress Zenobia Shroff is Kamala’s stern mother Muneeba Khan with the acting veteran having a career spanning 30 years and appearing in everything from Madam Secretary and The Affair to The Big Sick and The Resident.

Yasmeen Fletcher is Nakia Bahadir, a close friend to Kamala and the actress has appeared in TV series Andi Mack as well as TV movie Upside-Down Magic and film Let Us In.

In the role of Jersey imam and Kamala’s mentor Sheikh Abdullah is actor Laith Nakli, who has appeared in Hulu’s Ramy, 24: Legacy, and films 12 Strong, The Long Road Home, and The Wall.

Taking on Kamala’s sister-in-law Tyesha Hillman is Travina Springer, who previously starred in Life in Pieces, Strange Angel, and The Mule.

Alysia Reiner plays an agent called Sadie Deever, with the star most famous for her part as Fig in Orange Is The New Black. She’s also had roles in Better Things, The Deuce and the movie Sideways.

Other cast members include Laurel Marsden as Zoe Zimmer, Fawad Khan as Hasan, Arian Moayed as P. Cleary, Adaku Ononogbo as Fariha, among others.

Episodes will be dropping on a weekly basis with fans having to tune in to see how Kamala contends with her newfound powers.

The trailer for Ms Marvel dropped in May and has now draw in over 21 million views on YouTube as Marvel fans eagerly await the new series.

Ms Marvel airs on Disney Plus on Wednesday, June 8