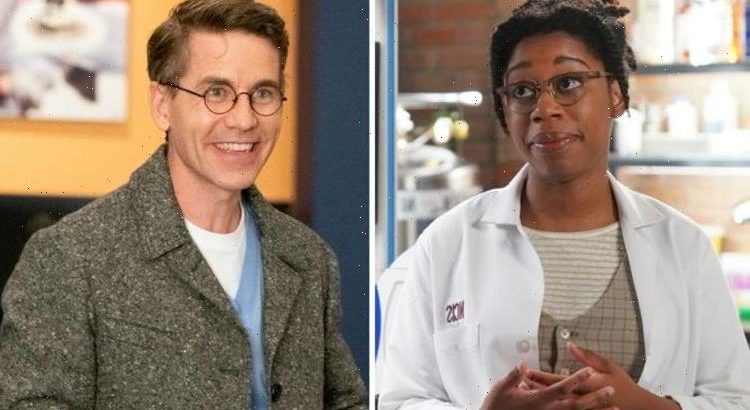 NCIS’ Diana Reasonover portrays forensic expert Kaisie Hines in the CBS police procedural. She originally joined the cast as Abby Sciuto’s (played by Pauley Perrette) understudy who left at the end of season 15. Over time, Kasie has become an integral member of the team and a dear friend of chief medical examiner’s Jimmy Palmer (Brian Dietzen).

Unlike the field agents, Kasie doesn’t go out to investigate like the rest of her team.

She stays behind at NCIS HQ to work on the forensic side of each case so isn’t always there for the action.

Kasie isn’t alone though as she remains in the office with Jimmy and as the series has gone on, the pair have become a lovable duo.

And going by Reasonover’s latest comment, their friendship goes beyond what’s in front of the camera.

Jimmy has been part of NCIS since the season one episode Split Decision when he was hired as Donald “Ducky” Mallard’s (David McCallum) assistant.

But actor Dietzen has now taken on a new role that sees him play more than just the optimist of the show.

He has been working behind the scenes of NCIS to write his very own episode of the CBS drama.

Dietzen took to Instagram to share the good news with his followers and a picture of his script.

Dietzen posted: “You guys, I got to write a script of @ncis_cbs with my pal @mostxsw and it’s been a great adventure so far.

“We jump into filming this bad boy after the Thanksgiving weekend, and I couldn’t be more excited.

“It’s my first time writing for the show, and it’s been a great experience. I’ll keep you guys updated along the way.

“So pumped to share this with you all. Giving many thanks this week!”

The NCIS star got more than 18,000 likes for his post and hundreds of messages in support of his latest career move.

One of which was from his co-star Reasonover who replied with a sweet message.

She simply wrote: “It’s a great script friend”, with a red heart emoji at the end.

Fans were clearly thrilled to see her support for Dietzen as her comment received 118 likes.

NCIS has been missing for the past few weeks due to a schedule shake-up.

But there is no need to worry as the drama is returning for its latest episode on Monday, November 29, on CBS.

The synopsis for the episode Peacekeeper reads: “NCIS investigates the case of a Navy reservist whose body is found in a beat-up car at the end of a gun range.

“Also, Kasie weighs the pros and cons of buying a gun.”

NCIS season 19 airs every Monday on CBS in America. A UK release date hasn’t been announced.